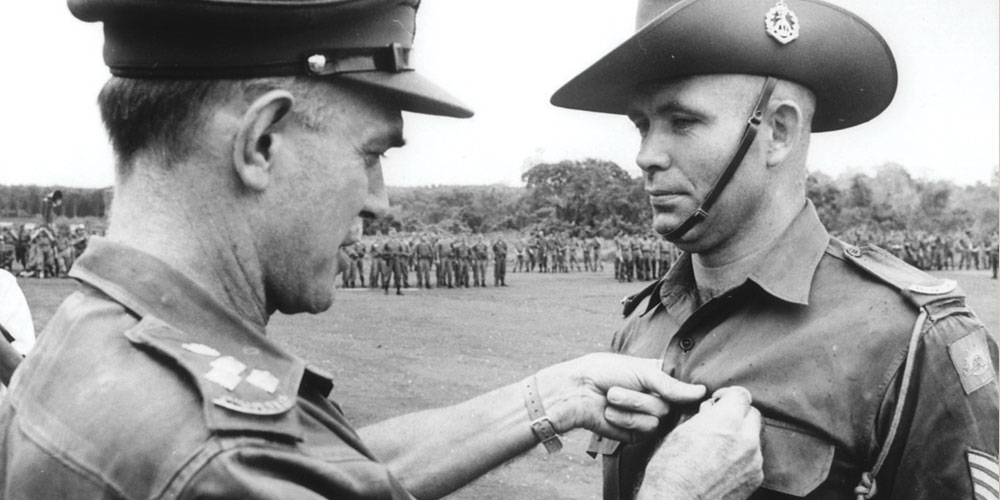 Bob Buick receives his Military Medal from Brigadier O.D. Jackson for his part in the battle.

Late in the afternoon of August 18, 1966, a company of 108 young and mostly inexperienced Australian and New Zealand soldiers were fighting for their lives in the pouring rain, amid the mud and shattered trees of a rubber plantation called Long Tan, in South Vietnam.

Among them, was Sgt Bob Buick, now 79 and living on the Sunshine Coast.

And although he has never looked back, he has found himself represented in a new film shot in Queensland that revisits what was probably Australia’s most significant and bloodiest engagement of recent times.

Danger Close: The Battle of Long Tan chronicles the events of that fateful day when Major Harry Smith (played by Travis Fimmel) led the 108 men of his company into battle against at least 2000 Viet Cong guerrilla fighters and North Vietnamese regulars.

It became one of the most savage and decisive engagements in Australian military history. In all, 18 Australians and at least 250 enemy were killed, with some estimations being over 500.

And Buick was there in the middle of the desperate conflict.

He is portrayed in the film by Luke Bracey and while the two have only jsut met, they have been in email contact.

“Yes, I can see myself there,” he says “It basically relates to me. The story and that part are quite recognisable.”

He remembers it as an encounter battle, when neither side knew the other was there until, of course, the shooting began.

“We’d been in the country about two months. We were a bit thin on the ground then. It’s still not clear exactly what the enemy’s intention was,” Buick says. “But anyway, they screwed it up by sending in a few mortar rounds and we went to see what was going on.”

The rest, as the cliche goes, is history. 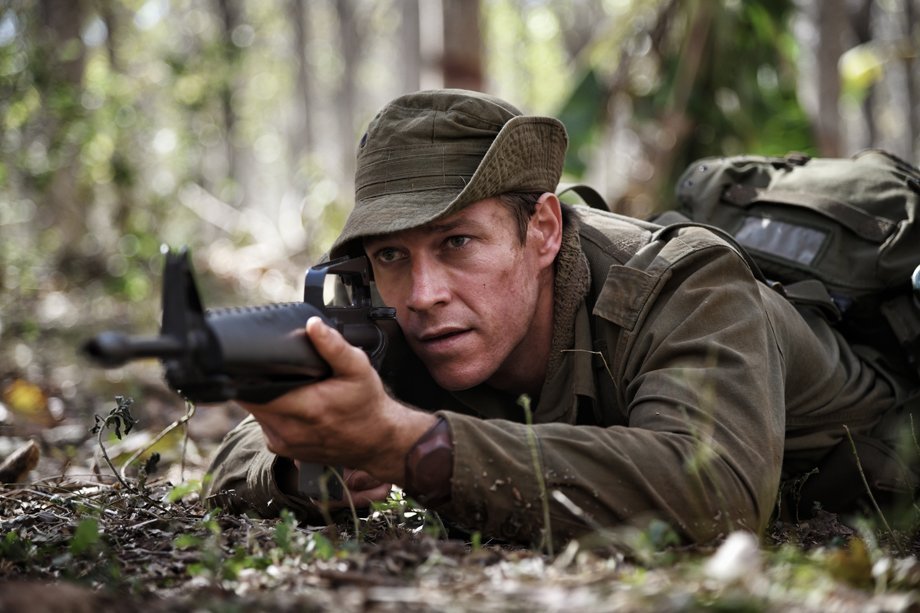 Danger Close: The Battle of Long Tan is very much an Australian production, releasing nationally this month and following the fortunes of those young soldiers who set out in the pouring rain of a Mekong Delta region rubber plantation to fight the battle of their lives.

Buick, like most of us, has seen any number of war movies.

“Trying to faithfully replicate battle scenes would be extremely difficult,” he says. “I’ve seen quite a few. Many are Hollywood-ised and I suppose the best ones would need to be 80 per cent reality and 20 per cent Hollywood.

“This one would be among the best. In my view it’s still a bit too Hollywood-ised but it’s the first Aussie movie of a real battle portraying actual events.”

(There have been other films but the battle scenes were part of the story and not the story itself.)

Delta Company of 6RAR with Bob Buick was sergeant in Eleven Platoon, went into battle that day with 29 warriors. Just under four hours later there were 16 still alive, of whom eight were wounded. They suffered the highest casualty rate of any platoon in the 10-year Vietnam conflict.

As the smoked cleared, it became clear what had been achieved – that the 108 Anzacs (there were three New Zealanders) had pulled off a stunning victory that was to have repercussions for the rest of Australia’s involvement in the war.

“There was a theory that they (the North Vietnamese) were just testing the Australians but it’s still not clear what their true intent was that day,” Buick says.

Whatever their intent, they got more than they bargained for as Long Tan established the Australian contingent as a body of men (there were no women combatants in those days) not to be taken lightly.

Documents found on a prisoner later in the war indicated that the North Vietnamese were urged to avoid pitched battles with the Aussies. They were, apparently, just too costly.

“There had been no presence in that region since the French were defeated in 1954,” Buick says. “We had it pacified and then went on to support US operations in the country.”

The Aussies, however, were not under US command and after Long Tan there was no similar serious engagement.

Buick says he has no single outstanding memory of the battle of Long Tan: “Just the whole day really and then the two or three days after that when we cleaned up the battlefield.”

He joined the army in 1959 and after a decorated military career retired in 1995 with the rank of WO1 – Regimental Sergeant-Major – the pinnacle of promotion for any non-commissioned soldier and an honour conferred on a select few.

His book All Guts And No Glory recounts his experiences and his reasons for joining up in the first place. He has no regrets about his actions at Long Tan.

“How could I?” he says. “I was a professional soldier doing what I’d signed up to do. I’ve had a great life.”

Danger Close: The Battle of Long Tan is a dramatic exploration of war illustrating heroism, tragedy and the sacrifice of battle. With their ammunition running out, their casualties mounting, and the enemy massing for a final assault, each man begins to search for the strength to triumph over an uncertain future with honour, decency and courage.

The film is being released this month and Your Time has five double passes to be won. Simply send an email  to editor@yourtimemagazine.com.au with your postal address.

Passes, which are valid for most cinemas, will be sent to the winners soon after the film’s release on August 8, and the names of winners published on our website at yourtimemagazine.com.au