He felt a wave of searing heat brush his shoulders and neck, then turned to see the nuclear mushroom cloud form in the sky.

Trevor Robinson was only 23 and had no idea of the fatal consequences for many of his cohort. He was only doing his job as a member of the Australian Army in the 1950s.

Now aged 85 – only 2000 of the 15,000 servicemen sent to Maralinga, Emu Field and the Monte Bello Islands, were still alive in 1996 – Trevor is lean and fit but still carries souvenirs of the mushroom cloud.

The pupil in his left eye sits in a bed of cracks, like a dam in a drought; he puts iron tablets in his cereal each morning and has a Vitamin B12 injection every month to fight the cancer cells in his blood.

“I’m told the average age of death for those of us who took part was 53.8 years. I’m 85 so someone upstairs spared me,” he says. “Most people don’t know there were 12 atomic bombs let off in Australia. I was there for four in 1956.”

Trevor was born in Clare, South Australia and joined the army two months before his 19th birthday. He was a Warrant Officer when he quit 15 years later.

He celebrated his 21st birthday in Japan, where he was based for two years, three months of them in Hiroshima less than a decade after it was blasted. 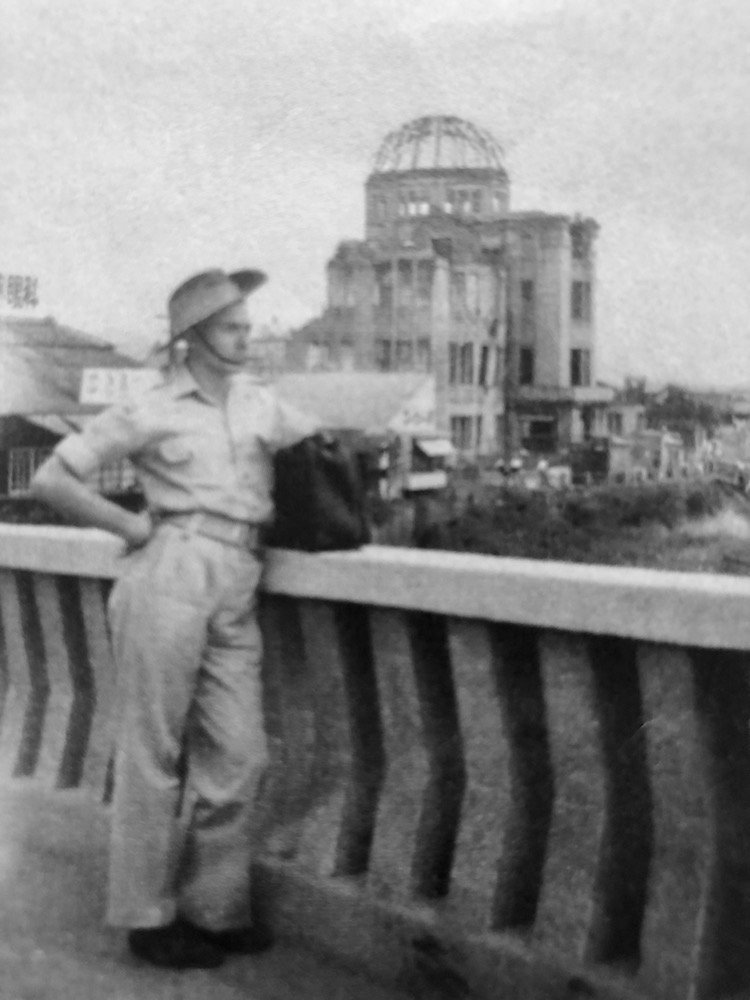 Trevor Robinson at Hiroshima in 1954.

He would have been on active service in Korea and later, Vietnam, had he not suffered a heart attack at the 23rd mile of a run wearing full battle gear and weapons at the Kure Battle School in Japan.

Rather than being discharged as medically unfit, Trevor was kept on clerical duties. His job was to support soldiers coming in on R&R from the Korean War, work which earned him a UN Korea Medal.

Years later, he was given the unenviable task of notifying families that their husbands and sons wouldn’t be coming home from Vietnam.

In 1956, Trevor was posted to Keswick Barracks in Adelaide and from there to 11-Mile Camp where he was to spend almost four months, August to November, during Operation Buffalo.

“We were in the advance party sent up by road from Keswick Barracks to put up the tents etc for the 200 British officers brought out from the UK to observe the tests,” he says.

“The truck I drove up was loaded with tents and blankets and I slept on top of them at our overnight stops. It was 61 years later that I learnt that the same tents had been used at Monte Bello and were polluted with radiation.”

It was a massive project.  A township was built, along with an airport runway, roads and towers.

After each nuclear bomb was detonated, officers would stand on the tray of a truck while Trevor drove them around to inspect the damage at each site.

“At the bottom of the tower would be a tank, truck, animals and sheds every 100 yards out. The closest were destroyed but further out, a tank was lifted up and put down unharmed. It was mind boggling,” he says.

During one explosion he was in a trench only 1.5 miles from the ground explosion.

“I felt the terrific bomb blast of heat on the back of my neck and then turned to watch the mushroom cloud form,” he says.  “I saw brilliant-red soil that had been turned into glass by the heat. We were walking on glass.”

In all, there were four nuclear tests – One Tree, Marcoo, Kite and Breakaway – in Operation Buffalo during those months, dropping a total of a total of 28 kilotonnes of TNT in four tests, two from towers, one at ground level and one from an RAF bomber at 35,000ft. 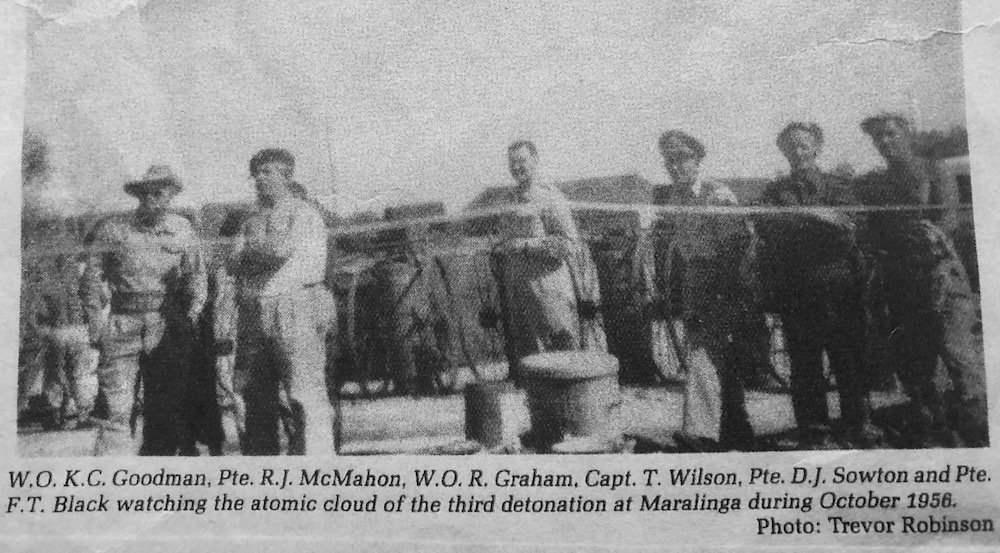 “The entire convoy was contaminated by the plutonium fallout from the Kite nuclear detonation at Maralinga,” Trevor says. “It was fired in conditions that violated the firing criterion of the wind direction. It was veering from south-west to north-west.

“The dangerous nuclear mushroom cloud was blown south and contaminated the roadside base, Maralinga Village, Airstrip, 11 Mile Camp and the Watson base.

“The tests should have been postponed because the wind was in the wrong direction, but since both US and Russian observers, which was a shock to me, had been invited it was important all went well. I was only aware of the 200 British officers.”

All four tests Buffalo were criticised by the 1985 McClelland Royal Commission for being conducted under inappropriate conditions.

In 2001, University of Dundee researcher Dr Sue Rabbit-Roff uncovered documentary evidence that troops had been ordered to run, walk and crawl across areas contaminated by the Buffalo tests in the days after the detonations.

“She told us that the badges we had worn to show radiation levels were deliberately faulty so that they recorded nothing,” Trevor says. “The only person I saw in protective clothing was the famous British scientist Sir William Penney who was in charge of the tests.”

Large areas of other states were covered by heavy fallout of Stronium-90. Brisbane’s milk from areas west of Rockhampton had to be destroyed and dust storms from Maralinga blew deadly contamination to Adelaide, New South Wales and Queensland.

“When we think today about the naïve and cavalier way in which these tests were planned promoted and conducted, when we read about how the effects of the tests were ignored and covered up and denied, I think all of us are amazed and appalled,” Trevor says.

In November 1956, Trevor was part of the rear party that folded the tents, blankets and stores and drove them back to Keswick Barracks. 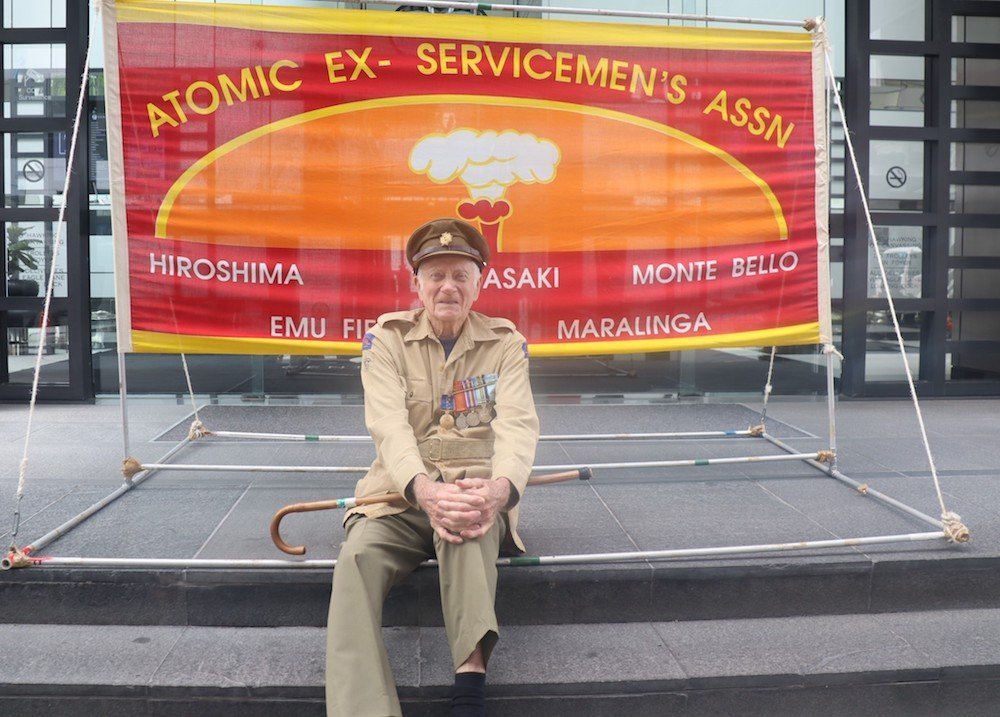 He was posted to Victoria Barracks in Brisbane and later to Port Moresby. After leaving the army he joined the PNG Electricity Authority as an administration officer and remained in New Guinea for almost a decade.

Returning to Brisbane he worked at the airport driving the catering trucks for TAA which had the contract for overseas airlines flying into Brisbane.

But then, when most are considering retirement, Trevor found a new vocation, one which saw him presented with an Order of Australia Medal by the Queensland Governor Penelope Wensley in 2013 for his services to human rights.

In 1995, he and a small group in Brisbane had established the Gay and Lesbian Immigration Taskforce in Queensland, which was already operating in every other state. Trevor dedicated himself to helping others and became a JP so he could help sign the paperwork.

He realised he was gay when he was in his 30s. Looking back, he considers it a blessing that he was older, as at that time, the army would have had him shipped off to Melbourne for electric shock treatment before handing him a dishonourable discharge.

Instead, every year he proudly leads the nuclear veterans at the Brisbane Anzac Day parade.

The Atomic Ex-Servicemen’s banner is carried by the Scouts and lists Australia’s Maralinga, Emu Field and Monte Bello along with Hiroshima and Nagasaki while Trevor still wears the same uniform he wore as a 21-year-old in Japan.

Still busy with his projects, he remains a popular and familiar figure on the streets of Paddington – and still appreciates that he’s lucky to be alive.