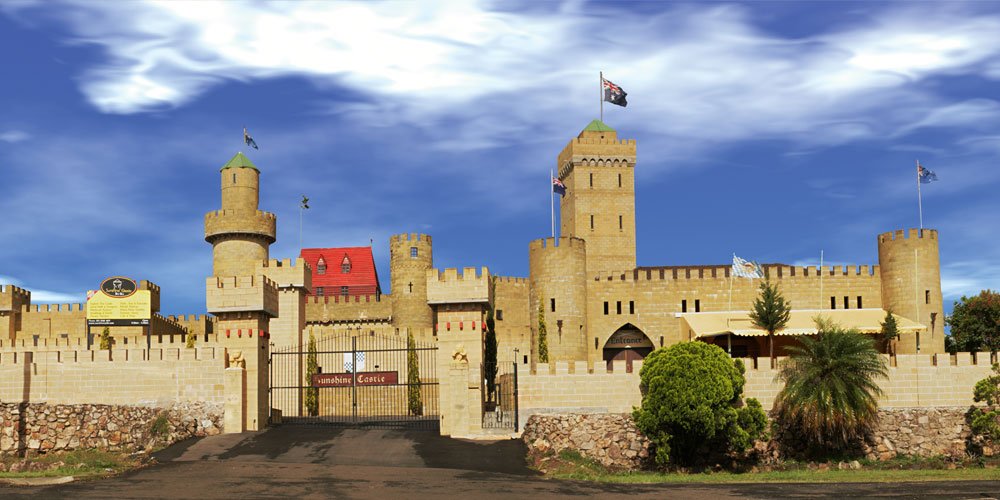 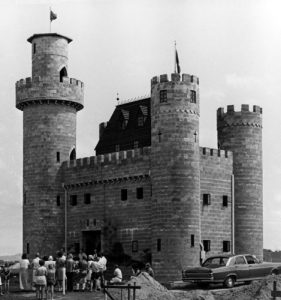 It opened as the Fairytale Castle in 1973, later became Bli Bli Castle and is now the Sunshine Castle, yet it has had only three freehold owners.

It is estimated that the castle attracted a million visitors in its first three years of trading.

The castle was built by Ian and Marcia Hayne, who in 1971 purchased land on a rocky knoll in Bli Bli, overlooking cane fields and the Maroochy River.

They wanted to build a Norman castle as a tourist attraction.

Interior displays were eight popular fairy-tale dioramas as well as a doll museum. Marcia was the artist, organising the displays and hand-making costumes.

Two of the original fairy-tale dioramas, the Twelve Dancing Princesses and Pedro and the Dragon remain on display.  There is also a section with dolls from the original displays, which now have heritage value.

Ian Hayne, a pharmacist, was a well-known Nambour businessman and community worker from the 1960s. With David Sharpe, he established the Antique Car Club of Nambour, now known as the Sunshine Coast Antique Car Club.

Most significant was his suggestion when he was president of the Nambour Apex Club in 1959-60, that the town needed a village for its senior citizens.

Ian famously came up with the idea of a pole sit-a-thon. A small room, less than 9sq m, was secured on top of a pole 6m up and opposite the Nambour town hall.  He and another businessman, Tom Carter, stayed there for seven days as they called everyone in the local phone book seeking donations.

It was a fundraising effort that has never been equalled and in 1963, premier Sir Frank Nicklin, officially opened the first units of Sundale Garden Village.

The original castle has been expanded over the decades. A great hall and moat were later completed, with displays of medieval armour imported from Europe, Germany, Spain and Italy.

In 1978, the Great Tower was erected in stages in conjunction with an expansion of the souvenir shop, and Tudor facade on the shop front.

The tower opened to the public in 1980, providing – like the medieval castles – a superb view of the surrounding countryside.

In 1984, Sandy MacKenzie, his wife Joan and Kevin Tuckwell purchased the Castle and re-named it Bli Bli Castle.

Their plan was to enclose the area and include the nearby house into the complex. The courtyard was enclosed and a tearoom and shop opened for Christmas 1984.

During much of the 1980s and 1990s the castle remained as a doll museum. Dolls in national costume were added. 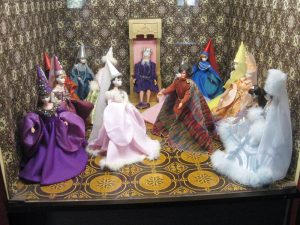 In 2002, Bernd and Margret Benecke acquired the castle and renamed it Sunshine Castle as they set about making major additions and alterations.

Castle security was improved by adding a front wall and gate, complete with four watch towers, and the courtyard was enclosed.

The Great Hall with flags and wall tapestries has become an exhibition area with the thrones for the king and queen, and long tables and chairs for feasting.

A staircase winds through the exhibits on different levels to the top of the Great Tower.

Medieval exhibits have now replaced dolls. Central are suits of armour with chain mail and plate. Fearsome weapons of war including the long sword, the battle axe, the metal-headed mace and the dagger are on display, as well as lances used by mounted knights.

Sunshine Castle offers much to see and do. These days visitors can take a self-guided walk or book the castle for corporate functions, festivals, weddings, parties, operas and concerts.  It’s also a great place to take the grandkids for an educational and entertaining day out.