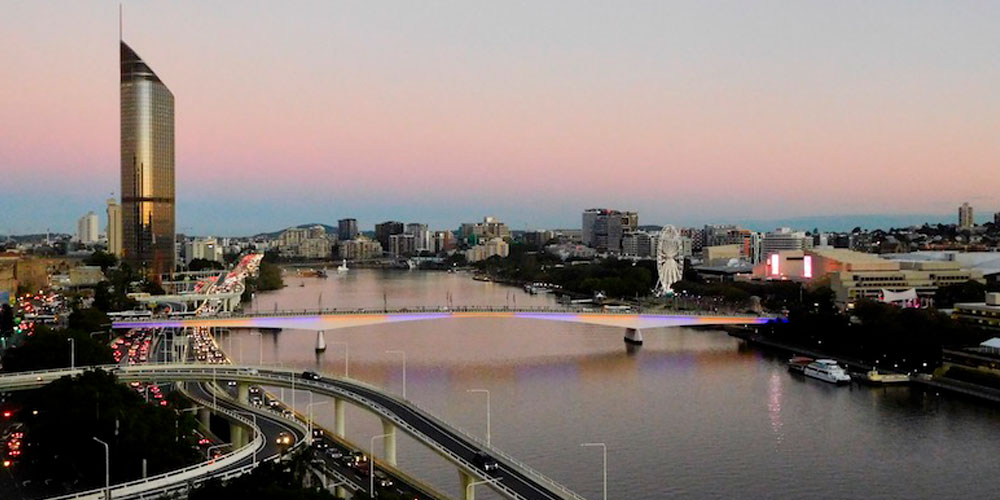 The Victoria Bridge Abutment is so much a part of the scenery that we probably don’t take much notice of it anymore, yet it has a story to tell as part of the city’s history.

Victoria Bridge, like the famous London Bridge, kept falling down. The current bridge is the fifth attempt and third permanent crossing at this point of the river.

The first attempt was made of timber and opened in 1865. It lasted only two years before it was eaten by woodworm and collapsed.

Meanwhile, a more permanent structure had commenced in 1864, and after considerable brawling about how and who would pay for it, city or state, it was finally opened a decade later in June, 1874.

It quickly became an important link and South Brisbane boomed. 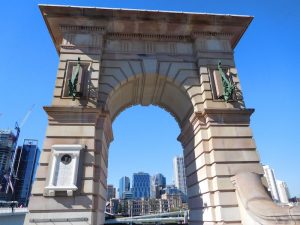 Built of iron, it was named for the ruling Queen Victoria and was a toll bridge until 1877 when ownership was transferred to the colonial government.

During the devastating 1893 floods, it succumbed to the rushing waters and debris, and down it went too, or at least part of it.

A temporary bridge went up the same year, but it was washed away by floods in 1896.

By now though, a second serious permanent bridge was getting close to completion. This time it was built of metal and stone (not silver and gold) and it was fourth time lucky.

Designed by the government architect Alfred B. Brady, it was made of steel with cylindrical pillars supporting the span across the river, metal arches, and grand stone arches at each end.

It was even able to support the trams which were coming to the city, although by 1943, it was starting to buckle under the weight of ever-increasing traffic and tram numbers had to be limited.

It’s from this bridge that the abutment remains, an elegant reminder of another time, largely thanks to the Greek community.

After the current bridge opened slightly upstream in 1969, and the trusty metal bridge was to be demolished, the Greek community held discussions with Brisbane City Council that led to one abutment being retained.

This was because it held the memorial to young Hector Vasilyi, an Australian of Greek heritage.

In June 1918, 11-year-old Hector, a newspaper boy and fervent patriot, was welcoming home soldiers at a parade when he was hit by a swerving vehicle and killed. 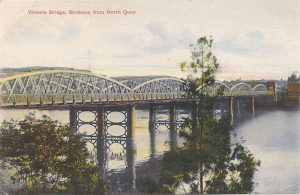 A marble plaque in his honour was placed on the pillar and it was this that helped save the abutment. The Greek community continues to hold Anzac Day services here each year.

The whole thing was left as a ruin though until Expo 88, when it was tidied up and two bronze plaques added to record the bridge’s history.

Another plaque recognises the 1998 re-enactment of the Dungaree March, the 28 men who left Warwick in November 1915 to enlist. By the time they arrived 14 days and 274km later, their number had swelled to 125.

The abutment was listed in Brisbane Heritage Register in 1992 and finally refurbished in 2014, when a pedestrian bridge was built to connect the site to the bridge.

The stone archway still has the metal brackets where gas lamps once hung as well as remnants of the original roadway and tram tracks.

Victoria Bridge remained the only permanent river crossing until the 1930s when the William Jolly Bridge, named for the Brisbane mayor, was built followed by the Walter Taylor Bridge at Indooroopilly in 1936 and Story Bridge in 1940.

Continue Reading
You may also like...
Related Topics: Brisbane history