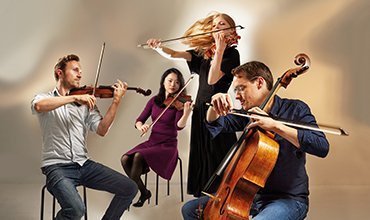 There’s no better way to spend a chill June evening than with the Doric String Quartet.  JULIE LAKE is loving every moment of Musica Viva’s 2019 season.

THIS world-acclaimed foursome – Alex Redington and Ying Xue (violins). Helene Clement (viola) and John Myerscough (cello) – exudes youth both in appearance and in the freshness with which they tackle each of the pieces selected for the Australian tour.

All three works offer very different challenges which this quartet raised its bows to meet with an unfussed technique and elegance of tone.

Haydn’s not-so-well-known number 4 of the six opus 33 string quartets can be a tough way to begin a concert because it frisks into life without preamble and tends to take the listener by surprise.

It’s a lighthearted piece altogether, albeit with a heartbreakingly lovely largo, then ends with a touch of typically Haydenesque quirky wit.

The Doric captured it all. And it’s wonderful to see a viola that was once played by Benjamin Britten in the slender hands of Helene Clement.

Brett Dean, who now lives and works mostly in Europe, composed his third piece for string quartets  to celebrate his relationship with the Doric. The 2019 Musica Viva touring season has been its premiere.

It is inspired by today’s socio-political events and we are told in the program notes that while the quartet was very excited by this five-movement work,  members  were at first a bit “scared” by it.

No surprises there. It’s full of sound and fury and shocking contrasts. In one movement the musicians even have to wipe the rosin from their bows to create a “whispery” sound that comes close to silence.

Hidden Agendas challenged the audience almost as much as it did the players but it’s a mark of Brisbane’s increasing sophistication that this composition was greeted by warm applause.

Finally came the Beethoven which has posed a very different sort of challenge to string players since 1826, because of its revolutionary seven movements without a break between.

It’s a mighty work with much delightful musical conversation between individual instruments. And so “modern” in parts that you can scarcely believe it was written nearly 200 years ago.

Altogether a wonderful evening of chamber music with four splendid performers able to give us something new in their interpretation of familiar works while also helping us come to grips with something new.

If you’d like to hear more, head to gardenezi.com