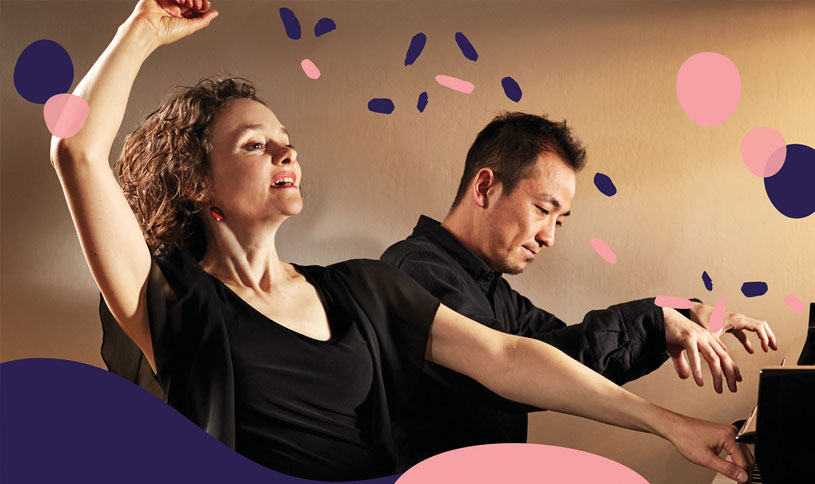 Four hands, 20 fingers, two bodies, one piano and what appears to be a single marvellous musical mind makes ZOFO the most exciting pair of performers Brisbane has seen in a long time – if ever!

Full marks to Musica Viva for bringing us this truly dynamic duo to introduce the 2019 international concert season.

Keisuke  Nakagoshi and Eva-Maria Zimmerman (pictured) are the Torvill and Dean of piano, with good looks and charisma to match their stellar technique.

They describe their ZOFOMOMA world tour as “a musical tour through a virtual museum of art” and to achieve this, they commissioned 15 short piano pieces from composers around the world, inspired by paintings selected from each composer’s culture.

As Nakagoshi himself says, they are encouraging a return to  the four-hand piano duetting so popular in the 19th century and  mostly forgotten by the composers of the last century.

The setting is deceptively simple.  A single grand piano and two black-clad performers in a pool of light; behind them a screen on which the paintings are displayed in turn.

Nakagoshi and Zimmerman duet with their bodies as well as their hands, occasionally winding themselves into a supple interlock while their fingers interpret the composer’s vision with such command of the keyboard that you know, as a member of the audience, that you are witnessing something new and extraordinary in musical performance.

Each piece, and its accompanying painting, is linked by a gently traditional promenade theme, arranged by Nakagoshi and played in turn by one performer while the other gets up and slowly moves around the stage.

An exchange of seats then prefaces the next piece and these “promenades” serve to heighten audience anticipation.

The concert began with a work that stayed well inside the boundaries of tradition-rooted contemporary composition; Gilles Silvestrini’s Le Bassin D’Argenteuil inspired by Monet’s painting of the same name – all air and water and delicate light.

From then it moved towards the limits of musical outer space, especially in the works of Pawel Mykietyn, Cecile Marti, Gabriel Prokofiev and – in particular  – Englishman Jonathan Russell.

As ZOFO took us on our global journey it was noticeable that as we went further east to China and Japan the music took on a more spiritual quality inspired by nature while the piece by Sabha Aminikia, inspired by Iranian exile Nicky Nodjoumi’s extraordinary painting Inspector’s Scrutiny packed a political wallop.

Those 10 fingers skimmed the keys in glissandos as hard and bright as diamonds or icicles and it made for a fine ending to a mind-stretching evening of pianoforte pyrotechnics.