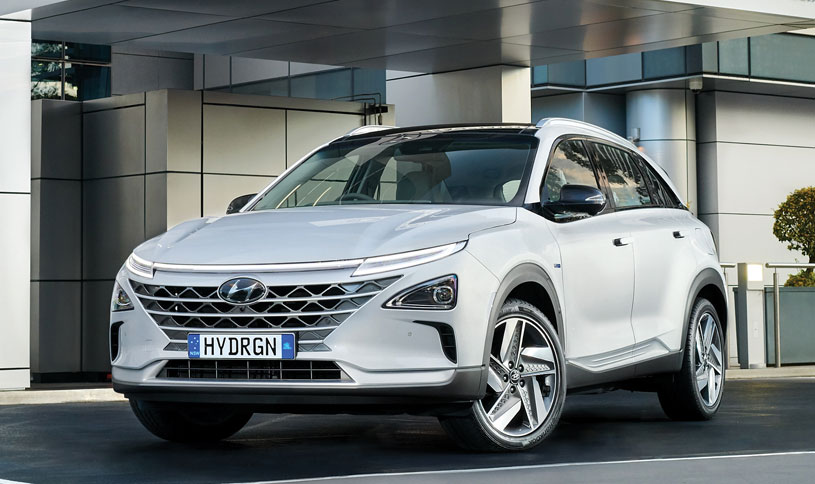 Fuel-cell vehicles, developed by the likes of Hyundai and Toyota run with tanks of hydrogen which, combined with oxygen, produces on-board electricity for electric motors. Out the tailpipe dribbles water.

Now Hyundai’s NEXO, a road-ready, hydrogen-powered SUV already on sale in Europe, is slotted for sale in Australia.

It’s been labeled ‘a game-changer’ in Britain. Autocar magazine credits Hyundai as “a world leader in advancing alternative fuel technologies, and developing them to production maturity before its rivals”.

NEXO’s electric motor produces 135kW and gets its power from an under-bonnet fuel cell stack which combines outside air with hydrogen from three high-pressure storage tanks.  An electrolyte, cathode and anode produce a DC current to drive the motor, and charge the battery, while water vapour is the only ‘waste’; Hyundai reckon it’ll run more than 650 kilometres with full tanks, refuelled in a matter of minutes.

As a pioneer FCEV, the Nexo isn’t cheap – some suggest prices north of $85,000 when it lands here.

There are advantages – better range, quicker refuelling for instance – over electric cars. There are disadvantages – higher costs just yet and refuelling infrastructure.

Yet is it easier to have hydrogen stored in Thargomindah or an extra power station?  Plus another 240-volt outlet 300 kilometres back down the track?

Toyota also have FCEVs in sight and prototypes driven across Los Angeles four years ago proved quick enough to refuel and keep up with the cut-and-thrust of freeway traffic. And very quietly too.

Back then the LA hydrogen price was mandated at about twice that for a gallon of petrol, but with at least twice the mileage at a conservative 88 kilometres per kilogram.

Despite the issues, FCEVs are the right solution at the right time, according to the US National Fuel Cell Research Centre’s director Scott Samuelsen.

Professor Samuelsen accepts that the combustion process, which turns fuel-bound energy into thermal energy, has provided useful power for 80 per cent of the world’s transportation and power generation for decades.

But it has also given us carbon emissions and greenhouse gases, some 90 per cent of the world’s pollutants, and uses around 90kg of oxygen per tank of fuel.

FCEVs, he says, are 66 per cent efficient at releasing energy from fuel compared with a petrol engine’s 16 per cent efficiency and electric-petrol hybrids — and hydrogen-burning combustion engines — at 32 per cent.

Fuel cells date back to 1842 but there was little development until the 1950s-1960s space age, when these became a perfect fit for space exploration.

Today Professor Samuelsen believes fuel cells are “ kind of the only business model which will survive for a vehicle production company”.

Fuel cells are already used across the US to power forklifts and some buses. Studies of California’s refuelling needs have found that motorists, given cars with better fuel consumption, would need just 15 per cent of current filling stations. Professor Samuelsen says in the real world it’d be more like 30-35 per cent.

(As long as there’s one in Thargomindah so we can get to Innamincka.)