It was open only to country teams who each year came from around the state to compete for honours, often in Brisbane.

Families had to fundraise to send teams away for the competitions, and basket picnics were made for visitors.

In 1946, the Country Cup basketball competitions were held in Nambour.  Teams from Cunnamulla and Quilpie played Yandina.  In the 1940s, there were seven girls to a team.

The competitions continued into the 1950s, but excluded the World War II years, when the government placed restrictions on travelling groups.

Church groups began basketball competitions for young ladies as early as the 1910s, when there were nine girls to a team.

After World War II, in 1946, the Maroochy Basket Ball Association was formed and teams competed for the W. Potter trophy.

William (Bill) Potter was a well-known shoe repairer and bootmaker in Nambour, and also a keen supporter and referee at matches.

Buderim won the trophy that year. Later, other shields and trophies were awarded for teams not competing in the Country Cup

Basketball became very popular and teams from local towns joined in the competition.

Games were played at the Nambour Rural School until 1948 when courts were established at Price St. 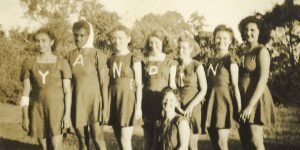 Players in the Queensland Ladies Basketball Association were Maroochy A and B teams in 1947. Young women of South Sea Islander, Aboriginal and European descent made up the teams.

Other athletic events such as tunnel ball, sprinting over 75 yards (68.5m) and relay races were often held during basketball competitions.

Women’s basketball has undergone many changes since it began in England in the 1890s. Two Englishwomen brought the men’s game from the USA and developed a set of rules to suit women.

A wicker basket was used as the goaling target and the referee had to climb a ladder to retrieve the ball. Women wore flowing skirts and leg-of-mutton sleeves.

The name of basketball was changed to netball in Australia in the 1970s and rules and costumes have indeed changed.