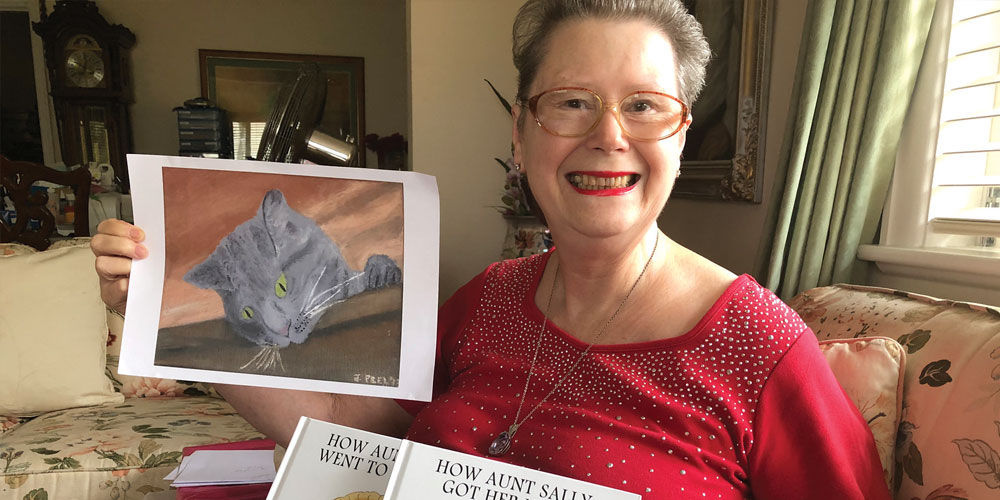 Aunt Sally is an old, grey, fat cat who has lots of adventures and although Jean Peel had never owned such a cat, the puss came creeping into her head one night in 2009.

“I couldn’t sleep and rhyming verses about this old grey fat cat called Aunt Sally just wouldn’t go away,” she says. “I had to get up and switch on my computer and then the story wrote itself.”
The result is How Aunt Sally Got her Name, and it’s the first in a series of children’s books about a cat which is loosely based on her long-deceased pet called White Puss, for obvious reasons.

“Nobody told me that you had to put sunscreen on a white cat’s nose and he got skin cancer,” she says. “We were living in North Queensland and during his 14 years he had been caught in a bushfire, nearly drowned in a dam and got lost in Cairns. These all became adventures for Aunt Sally too.”

Jean has now written nine books in the series, two of them published, and is working on an autobiography.

She’s also working on a novel about murder and mayhem on the Sunshine Coast called Dead Easy. It’s about a young coroner who ends up in a small town wanting to learn from a renowned pathologist when a headless body turns up on the beach.

It’s a plot that’s a long way from an old cat.

Although she has been writing all her life, Jean never aimed to be an author. As a teenager growing up in Scotland, she wanted to be a hairdresser but ended up working with numbers as a Tax Officer Class 1 in Glasgow, where she was born in 1945.

“Life seemed so grey there,” she says. “The walls were grey, the cars were grey, the streets were grey and the skies were grey. I needed sunshine so I applied for assisted passage and within three months I was on my way. It has been 50 years and I’ve never looked back”.

Jean arrived three days after the last tram rattled off the streets of Brisbane in 1969, and soon obtained a job with an accountant in Moorooka.

And she ended up getting more sunshine than she could have imagined. Five years later, she met Bruce Peel at a dance. He worked as a public servant with the Department of Aboriginal Affairs, and Jean soon found herself in remote North Queensland communities.

“I spent a lot of time in remote communities for a girl from Glasgow,” she says. “As a manager’s wife, I had to quit work as there was an unwritten law that unless you were a teacher or a nurse, then you didn’t work there.”

In 1989, the family, now with two boys, returned to Brisbane and Jean could return to work. She was a finance officer with Queensland Health for more than a decade until a run-in with cancer forced her retirement in 2010. Her husband had died in 2007 just after his 60th birthday.

Throughout, Jean continued to write her stories and poetry. And then Aunt Sally came along.

All of her book titles start “How Aunt Sally” and then “…got her name … beat the burglars, … went to sea, …went to the zoo”.

These days Jean is busy promoting her books, and reading stories to children at local kindergartens and schools. And writing.

Her books are now in the UK and Canada and are aimed at children from about three to eight years.

“They’re great for grandparents as reviews indicate the adults enjoy them as much as or more than the kids,” she says. “It has become my business: ‘Jean Peel, author’; although I’m not expecting to have a tax problem.”

“I believe with all my heart that in these days of so much other stuff like Xboxes and iPads children could miss out on part of their literary education if they have no access to poetry,” she says.

And so, you wonder, how did Aunt Sally get her name? Simple: Because she was found in an Aunt Sally stall in sideshow alley. For those who aren’t familiar with the traditional English game of Aunt Sally, it’s any of those stalls where you throw a ball to win a prize.