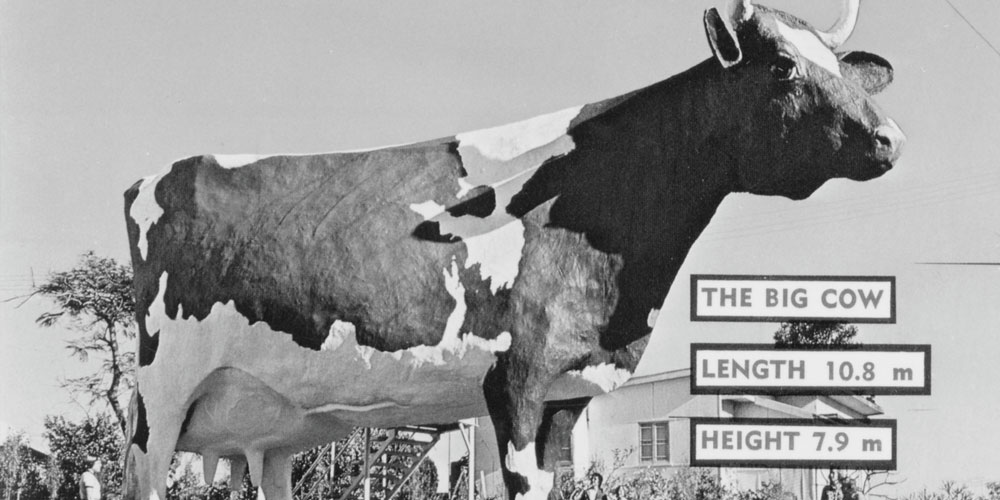 The Big Cow was recognised around the nation and its sudden demise has left a gap in not just the scenery, but also in our psyche.

A landmark since 1976, it was dismembered on January 10, and taken in two pieces to Highfields Pioneer Village Museum and Park 16km north of Toowoomba. Alas, it was gone before there was time to organise a farewell.

The Big Cow was modelled on a Maleny Ayrshire, a breed noted for its distinctive brown and white colouring, lyre-shaped horns and good milk supply.

An Ayrshire called Annie was the first dairy cow breed to arrive in Australia. They originated in the Scottish Lowlands.

The Big Cow, the largest concrete Ayrshire in the world, stood at the entrance to what was Sunshine Coast Dairy, later Country World, established by Des and Barbara Scanlan.  It even gave its name to its address – Ayrshire Rd.

He did the same to create five of Rockhampton’s famous Big Bulls and a gold mining monument transported from his Alexandra Headland studio to Charters Towers as a bicentennial project in 1988.

Sunshine Coast Dairy with the Big Cow as its star attraction, was officially opened by deputy prime minister Doug Anthony on September 10, 1976.  It included a restaurant with chocolate and strawberry milk from simulated teats at the Dairy Bar, animal nursery, dairy production display, bush walk, wishing-well for charity and a trip around the farm in a trolley behind a tractor with a horn that sounded “moo”.

Like the Big Pineapple, which had opened on the southern side of Nambour five years earlier on August 15, 1971, it was right on the Bruce Highway capturing the attention of passing motorists. Both suffered when the Nambour bypass was completed, and they found themselves on the Nambour Connection Rd.

His most memorable achievement though, was foundation of Australia’s first fulltime rescue service, the “Milky Way”.

His Jetranger helicopter, VH-COW, did surf patrols and joy flights using landing pads at Sunshine Coast Dairy and Alexandra Headland. The Big Cow became home to the Sunshine Coast’s first air-sea rescue helicopter. The base was moved to Maroochydore Airport in 1983.

The Scanlans sold Sunshine Coast Dairy in the 1980s, but the Big Cow remained in its commanding position looking over the old Bruce Highway.

In March 2016, it was reported as having fallen into disrepair and last year, the site’s current owners donated it to the Highfields Pioneer Village.

Its departure marks the end of an era for the Sunshine Coast but volunteers at Highfields plan to restore the grand old Ayrshire to its former glory.