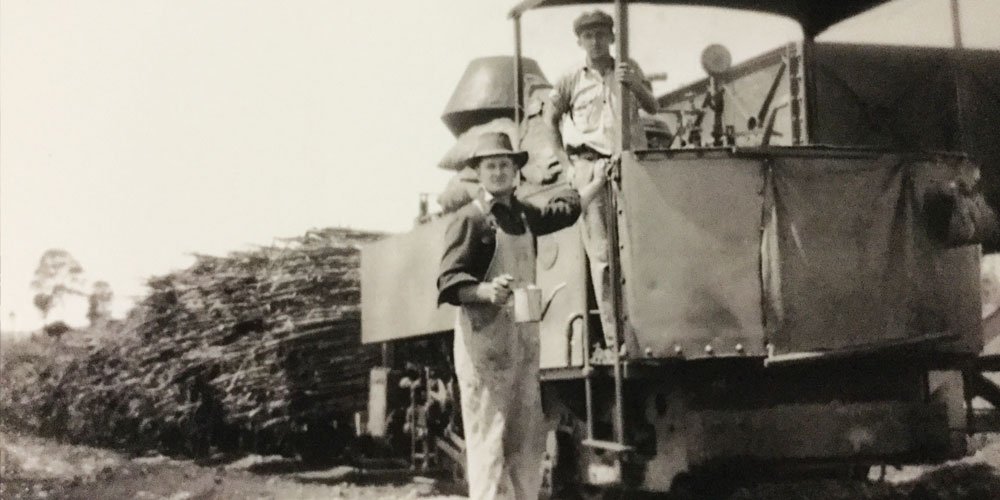 In the 1980s, Trevor Robinson of Palmwoods developed a great curiosity and passion for finding out more about the great network of tramlines that were used to feed the Nambour sugar mill.

Trevor was determined to map the tramlines. For 35 years as an employee for the Maroochy Shire Council, he would set out after work with backpack, metal detector, grubber and a few maps looking for evidence.

With permission from property owners on what was the Palmwoods-Buderim line, he found development encroaching and threatening to cover the old route.

Years later, he found the ruins of the Shay locomotive, once used on that line, buried along the track. The smoke-stack could be seen sticking out of the ground, but because of “red tape” Trevor doubts whether it will ever be retrieved.  Part of the track has, in recent years, been formed by council and can be walked.

The cuttings and track were originally cleared by hand labour. The other locomotive on that line was the Krause and, restored, it is stored safely at Wise’s farm waiting for the day when it will be displayed in Buderim.

A map telling the whole story was produced and is on display at various venues.

On the Mapleton-Dulong line, Trevor found many branch lines. Some extended from Highworth and others went to Image Flat and Finbury.

The Finnish community had established miles of horse lines, where a horse could pull a wagon. West of Kureelpa, another branch went to the farms of Pope and Story. He mapped the Coes Creek Line and the Perwillowen Line. He also found evidence of lines along Paynter Creek and Camp Flat Rd.

The Coolum line opened in 1923 carrying tourists, goods and cane, having progressed through Petrie Creek and Bli Bli where there was a horse line. There was also evidence of a proposed line from Point Arkwright to Coolum.

Trevor says he made other discoveries along the way. He found the remains of an old sugar mill established in the early 1880s at the end of Espin Rd.

It was actually a juice mill from which the “sugar cake” or “concrete” was sent to Brisbane for further refining.

Many of the locos that used the tramlines are able to be traced.

The first steam loco, the Moreton, is at the Yandina Ginger Factory, some are kept at the Nambour Museum and some are owned privately. As diesel locos replaced steam locos the same names were used, for example, Coolum, Moreton, Maroochy, Valdora, Bli Bli and Petrie.

Trevor says that many assisted him along the way – a graphic artist, a framer, a farmer, a head teacher, the council. All gave their time and knowledge freely as he has always done. The pleasure was all his!

In Howard St, Nambour, a piece of tramline has heritage listing. Many of us can still recall the cane trams crossing Currie Street on the way to the mill.

Locals are now looking forward to a new venture with an electric tram carrying tourists from the old mill site to the showgrounds. It’s a great idea and we will make sure we take the journey.