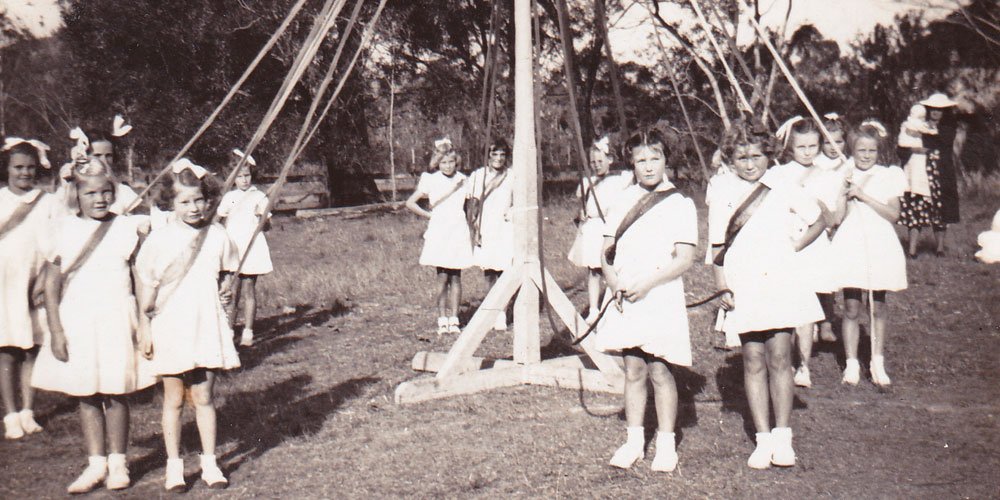 Maypole dancers in the 1940s wait in pairs for the music to begin. Hair ribbons have been specially chosen to match the streamers.

Remember those old photo albums with small black and white photographs carefully held in place by a small sticker in each corner?

You would also recall the spools of film carefully loaded into, say, your box brownie, and then the wait after delivering the finished spool to the local chemist. There was great anticipation as to what the photos may be like and great excitement to show them off.

All this was before television when many an evening would be spent filling out another page of the album. Entertainment for visitors often involved taking out the album. There was much talking. For my grandchildren, my young days are like a foreign country.

“What do you mean?”, they say. “No computers, no electricity, no internet, no mobile phones?”

The album opens: “This was the school I went to and it was just a single building.

“Here are students riding horses to school. Most of the children rode horses and there was a horse paddock. Some even arrived in a horse and sulky.”

A student once took a carpet snake to school for show and tell but that was not allowed. It’s a wonder he did not get “the cuts” and that was the punishment for homework not done, lessons not learnt or misbehaviour.

The teacher had a cane and gave whacks across the hand once or twice or more depending on the crime.

One day a week, students from the top class travelled by train to the local rural school where the boys learnt gardening, woodwork, and metalwork and the girls learnt sewing and cooking.

Learning was for the future, the boys would be farmers and the girls would be housewives.

There’s a photo of grandfather’s bullock team loaded with logs. And there is grandmother on wash day with the clothes in the copper.

And here is a steam train taking on water at the railway station. Roads were bad and hardly anyone had a car, so we liked train travel.

In World War II, air-raid trenches were built at the school. Here are the children in their specially made camouflage hats. When a siren was heard the children had to leave the building and sit in the trench until the all-clear was given.

World War II put many restrictions on people. There were shortages. Most children of that time never had toys.

Here we are doing the maypole dance and that was for special days. The ribbons in our hair matched the streamers. There were special days such as Arbor Day and Wattle Day. Break-up Day at the end of the school year was the best, with parents coming for a picnic. We waited all year for those small tubs of ice cream which arrived in canvas bags packed with dry ice. Races were held and everyone could win a sixpence.

This great grey box was on issue to all state schools in the 1950s. It was a radio and a record player, a radiogram. Such an innovation. Students were able to listen to records such as The Man from Snowy River which we heard over and over again.

There was also a record for marching into school. Radio reception was often poor and that was disappointing. That was as far as the school got with technology.

“Well Granma, that was OK. You know you can be quite interesting.”

Humble stokers – the men who sail below
Building the Sunshine Coast