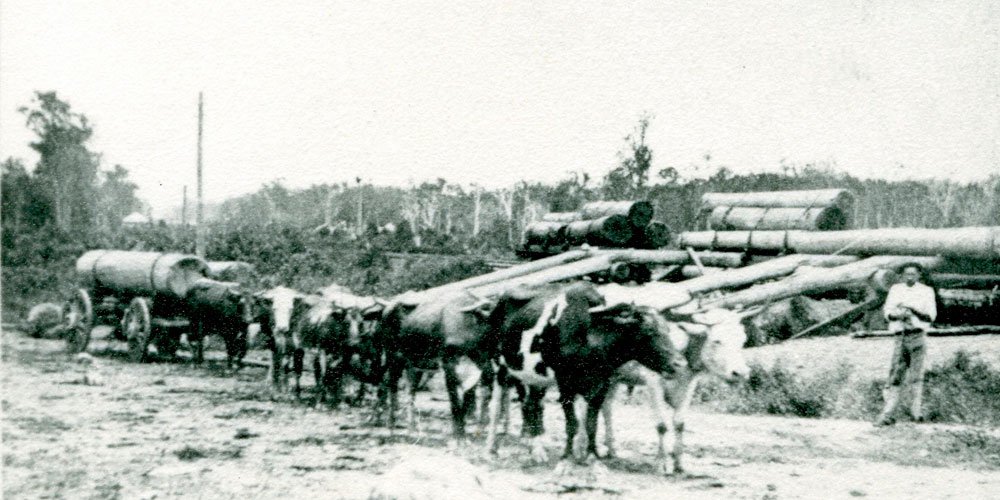 John Low with his bullock team unloading logs at Yandina Railway Station in the 1890s.

Modern buildings with exciting attributes creatively adapting new ways to live and work, and heritage buildings showing how we once lived, opened their doors for public viewing last month.

To quote the Australian Institute of Architects president Dr Michael Lavery Fraia, “Many of these buildings illustrate the unique connection between landscape, sustainability, materiality and place”.

In the 19th century, timber was abundant and cheap on the Sunshine Coast, so that was the building material of choice.

Detailed records were kept by Yandina timber-getter and landowner John Low, who planned a house, later to be known as Koongalba, for his coming marriage to Louisa Bury in 1894. Those records have survived.

Communication at that time was by letter and John Low wrote many letters during the course of construction of his house. This is long before electricity came to the district or even telephones, radios, cars or trucks. 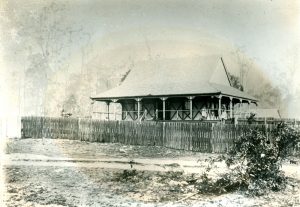 John and Louisa Low and children on the verandah of Koongalba in 1904.

He acquired two allotments, each of half an acre. One lot would be for his house and the other for the house garden, and settled at a cost of £5.

His first letters were to Surveyor J.C.Reid asking for the cost of survey; to Brisbane Permanent Building Society asking about a loan; to solicitor Alex McNab asking about the title deed of the land; and to Willie Grigor, an old friend, asking him to build the house.

Cedar, beech and pine logs were rafted down the Maroochy River to William Pettigrew’s Maroochydore sawmill or to Richard Heddon’s sawmill on Paynter Creek by raftsman, Charles Brown.

Willie Grigor had supplied the measurements of the timber required and the cut timber was brought by pontoon up the river to Yandina.

A Brisbane merchant, Alfred Shaw & Co, supplied the hardware for the house, the nails, stump caps, locks, fasteners and even the sash supports for windows. Acroteria would decorate the front of the house giving a pagoda-like effect.

From Pettigrew’s catalogue he ordered both pine and cedar doors, sidelights, fanlights and decorative corner brackets for the veranda. An expert shingle cutter was called upon to make and nail into place the roof shingles

The house plan included four verandas enclosing three bedrooms and a front parlour with a central hallway. An open walkway, with water tanks either side, led to a detached kitchen and store room.

The house was built with a north-easterly aspect and was symmetrical – one side matched the other. Open windows allowed breezes to cross through the house while the hallway caught the breeze and cooled the house in another direction.

Painting and oiling of the house followed using Champions White Lead, both boiled and raw oil, whiting for putty, brown umber, yellow ochre and Venetian Red in oil (for colours). Records show he also bought a book on how to apply these.

The rail line had opened in 1891, so some goods were delivered by rail from Brisbane. Chapman & Co supplied soft furnishings. Foster & Kelk supplied furniture. He also ordered a sewing machine, water tanks, a meat safe, a stove, a mangle and a corn sheller.

In 1994, a house name was adopted – Koongalba, an Aboriginal word for place of clean water and an old name for the Yandina area.

The total cost was £230 for the materials. For construction of the house, John Low paid Willie Grigor £23 four shillings and eight pence – good value, especially considering it is still here after 127 years.