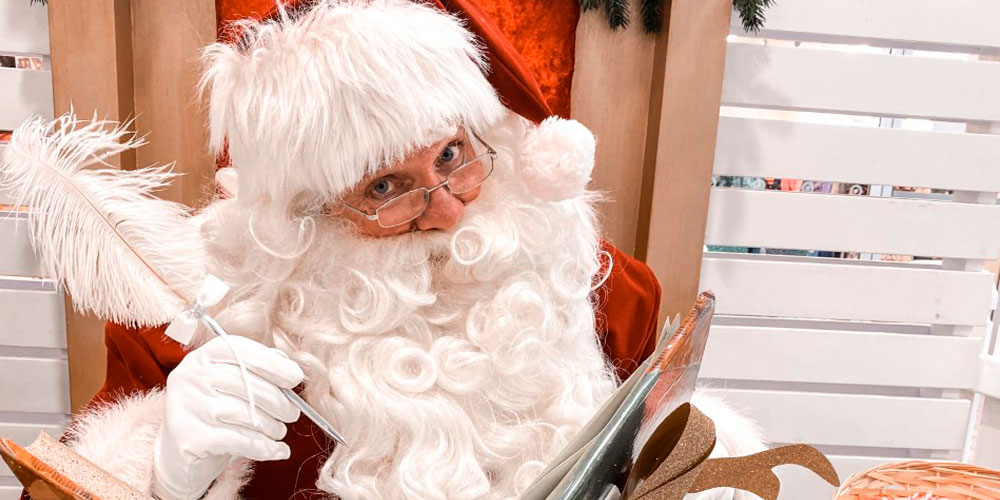 You would expect a professional Santa Claus to be rather portly, certainly very whiskery and perhaps sport chubby red cheeks and a very deep voice for all that ho-ho-hoing.

But Russell Krause, who has been playing Santa for more than three decades, is quite the exception … apart from a distinct Santa twinkle in his eyes.

Trim and fit and a youngish looking 58, Russell is the consummate performer who can transform from meek and mild everyday dad into the most traditional of Santas – not quite in an instant like Superman, but definitely in a short space of time thanks to his magnificent velvet costume, flowing beard, antique book of children’s names and feather quill.

And don’t be fooled by his normal chatty voice. After a little throat clearing, he can produce the deepest and best ho-ho-ho of any Santa around.

But like Superman who started as mild and meek newspaper reporter Clark Kent, Russell actually began his working life in a bank, as a marketing officer, although his heart always lay in performing and acting.

Born in Kingaroy and now a long-term resident of Peregian Beach on the Sunshine Coast, he moved to Brisbane where he worked with the CBA Bank which then became Westpac.

Following his performing passion he auditioned for a two-year acting course in Brisbane and was accepted and then graduated to work in the Queensland Theatre and La Boîte.

He and his wife Alison also ran an antique shop at Ashgrove for a while.

When World Expo 88 came to Brisbane, Russell formed a troupe with other roving theatre performers and started a company called Zest Factor which embraced a team of multi character roving theatre acts – mainly in Brisbane at that stage – but it grew bigger and bigger and eventually turned into major company bookings, even to the point of supplying knights and horses for medieval conferences and such like.

There were aerial performers, jugglers, bands and MCs and the company became well known for its quirky style and variety. 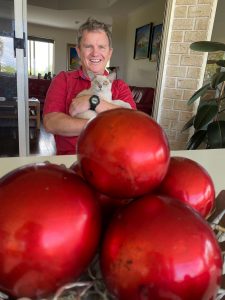 Russell, meanwhile, was in big demand for television commercials. It turned out he also had a great singing voice as well as a flair for acting and many people may recognise him as the man behind the beer in such ads as Redback Bitter, Fourex Gold, Fourex Bitter and Powers Brewing – as well as the face behind QSuper and Father’s Day Instant Scratch-its.

“I guess I just have the face of the bloke next door,” Russell says.

One constant through playing a host of characters for so many and varied functions from corporate events to golf days, was taking on the role of Santa Claus every Christmas, as well as often transforming into a Christmas elf along with his high school teacher wife, who is a very convincing Mrs Claus.

“I’m not usually a shopping centre Santa – I do Christmas Day functions and company Christmas parties and it’s a bit more quirky,” he says.

“I get the background info on people, especially CEOs and such, and personalise it. I don’t do a drunk Santa but I’ve done a bad Santa, although that’s not very common.”

Russell also managed, for many years, to convince he and Alison’s son Jackson, now 13, that Santa was the real deal.

When the very smart and tech-savvy Jackson was a bit younger he was so keen to catch Santa out that he set up a camera overlooking the cookies and milk he had set out for the big man on Christmas Eve.

“I worked it out,” says Russell. “He was videoing very fast, so I first got a torch and shone it straight into the camera, then I got a furry pillow and ran it past the camera to look like a reindeer, then I got in full costume and kept my back to the camera while I ate the cookies and drank the milk.”

Along with Alison as Mrs Claus, Russell has been Santa-ing at the upmarket Noosa Sofitel Christmas Day event, handing out presents to the children.

He always does his research to ensure he knows as much about the children and what they want – or have already been given – as possible. 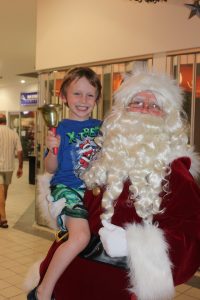 Russell Krause with his son Jackson.

The amazement and joy on the kids’ faces when he seems to know so much about them makes it all worthwhile.

He has also been a regular Santa at the Noosa Junction Plaza.

The tricks of the trade for his transformation are his heavy traditional costume with lots of padding and an ice vest.

Russell said Covid-19 had certainly knocked bookings for six, but this year they were gradually coming back and he and his wife and son were also kept busy with amateur theatre on the Sunshine Coast.

It seems Jackson has inherited his parents’ talents and has the role of Benji in Priscilla, Queen of the Desert with Mad About Theatre which will be coming to the J at Noosa and Caloundra.

But transforming into Santa will also be a favourite with Russell who says he’s not one to just sit and ho-ho but prefers to be proactive and find out all about the children – and adults – who come to see him, just to underline that sense of Christmas magic.

June is all about the heart and ‘sole’ of happiness