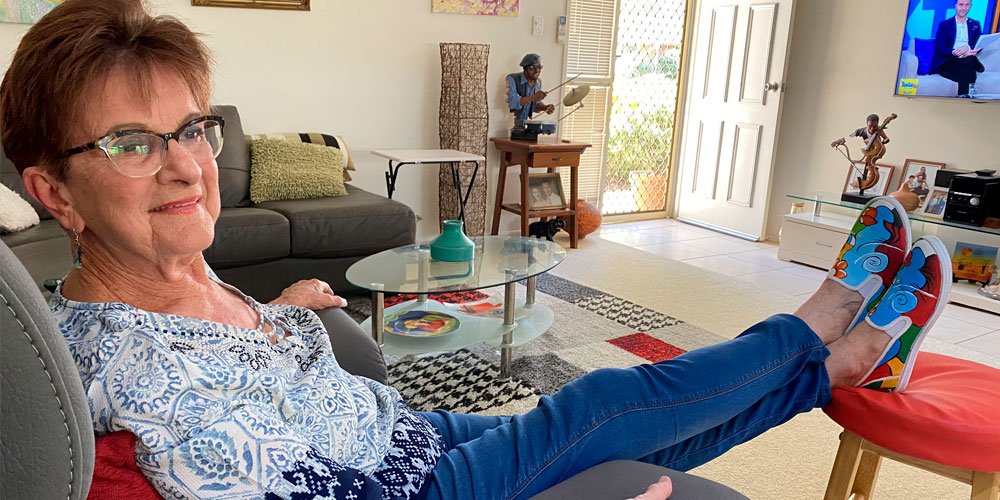 A talented artist with a lifelong background of self-taught painting and sculpting, a normally gregarious June Reilly found herself at a loose end when the Covid-19 lockdowns began last year.

Not one to admit defeat (pun intended) June scouted about for something to keep her artistic hands occupied and soon saw a blank canvas – literally – in white canvas sneakers.

She was tempted to call her venture “Happy Feet” but felt it would conjure up images of penguins from the popular children’s movie, so Happy Shoes it is.

Her creations were immediately popular and she has found herself with plenty of customers, even at the Hibiscus Retirement Village at Sippy Downs where she has lived for the past 12 years.

Many people may remember June as the owner of a pottery studio at Glastonbury near Gympie called Australiana, which she ran for many years while her husband John worked for the gas company there.

When John retired, they moved to the Coast and she has been keeping up her art pieces ever since. John died three years ago but she has her three children and six grandchildren to keep her entertained.

Now a youthful 80,  June became well known for her Australian-themed pottery works which included a range of larrikin characters and animals involved in various activities.

She still has one of her own detailed works portraying The Man From Ironbark and the mischievous barber.

“I have done art all my life,” June says. “I just enjoy it … I wasn’t taught. I got a lot of inspiration from the countryside.”

She and two friends from the village, Karen and Anita, have also started art classes for other residents at Hibiscus when Covid allows. They do it as much for the hilarity and company as the art experience.

“We do about three quarters of an hour of art and then have coffee and chat until about 1pm,” she laughs.

June said her Happy Shoes usually started out as basic white sneakers from somewhere like Big W. She usually spends about four hours painting them with different designs which she gleans from her own experiences and sometimes inspiration from the internet.

She usually sells them for about $35 to $50, or a bit less for children’s shoes which, with cute bumblebee and ladybird designs, are very popular.

She also decorates more expensive shoes such as Nikes with sparkles and pretty trims and these have become especially popular among friends who like line dancing.

When not painting shoes June turns her hand to portraits of people – and pets – when commissioned.

One day she got tired of looking at the blank blinds on her kitchen window and even painted them with shoals of bright fish which now swim across the view to her lush garden. 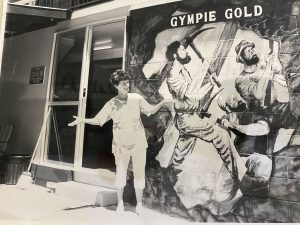 June in the days when she owned the Australiana pottery studio near Gympie.

She has kept a few pottery works at her home from her Australiana days and still does others on commission – usually with an Australian theme, from shearers to kookaburras and possums, which are in high demand.

Finding an outlet for her Happy Shoes hasn’t been easy with lockdowns and restrictions affecting a range of local markets where they would usually sell, but there have been successful exhibitions at Kawana and in her village and word of mouth helps.

June said that now, rather than buying and decorating a range of shoes in many different sizes, she prefers people to buy their own shoes in their size and bring them to her for her “happy” treatment.

They will also be on sale at a special Hibiscus Retirement Village market on November 6, from about 8.30am to 3pm in the village hall.

A keen traveller and lover of cruising, June is looking forward to once again hitting the high seas with friends when some sort of normality resumes.

“We have an absolute ball,” she says.

Trivia and table tennis also factor on her calendar but not line dancing.

“I’m not coordinated enough,” June laughs, adding that osteoarthritis is also an issue after having broken both her wrists at various times.

But mostly these days she spreads the happiness around with her colourful shoes – quite a feat in itself.

Talking about our generation …
Santa Claus has already come to town