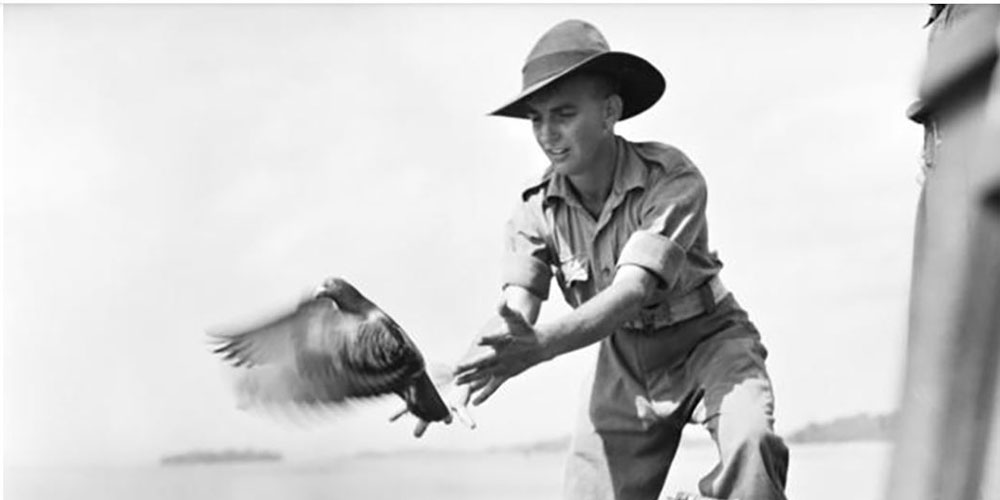 he pigeon wasn’t just a friend of British or American troops. In 1942, as Australia stared down the barrel of a Japanese invasion, the Australian Army were interested in developing alternative means of communication.

The idea of using pigeons was trialled and quickly proved a success, and the Australian Corps of Signals Pigeon Service was born. Everyday Australians got behind the cause, and donated over 13,500 homing pigeons to the service.

Pigeons provided a reliable communication service between the coastal defences of Australia, and they eventually joined the war effort in New Guinea as part of the Pacific War. The jungles proved a much tougher environment; mountainous topography, tropical rain, feather lice and a humid climate took its toll on the pigeons.

But pigeons were still considered an efficient tool for communication, and often a vital one. In July 1945, a boat carrying Australian troops began to sink on a beach off the coast of New Guinea. The boat was carrying valuable supplies, ammunition and equipment, and a bird by the name of Blue Bar Cock Pigeon No 139 became the hero.

Blue Bar flew about 65 kilometres to relay the rescue message, and a rescue ship was sent in time to salvage the boat and its valuable cargo. Blue Bar received the Dickins Medal for its effort, joining the list of pigeons who are now memorialised for their heroism in war.

The pigeon’s contribution to the Allied war effort can’t be understated. Take the story of G.I. Joe, a member of the United States Army Pigeon Service. In October 1943, during the Italian campaign of World War II, British troops battled with German forces to control the village of Calvi Vecchia, Italy.

The British attacked and won back the village well ahead of schedule but were unable to transmit a message to call off a planned American air raid on German positions, now occupied by the British.

As a last resort, GI. Joe was dispatched with a message to cancel the air raid. GI Joe flew about 30 kilometres in just 20 minutes and arrived at the American air base just in time for the bombing to be called off. Hundreds of troops and villagers were saved.

A SIXTH SENSE FOR HOME BASE

It’s certainly true that homing pigeons have been used to carry messages since ancient times. But in the fog of war, their skills and dedication are legendary. Long before modern technology made military communication simple, pigeons played a vital role in relaying vital information across the battlefield.

That’s because homing pigeons have an innate ability to find their way home. They’re also not easily distracted, and their keen sight and superior memory helps them identify landmarks. A pigeon’s small stature also came in handy during conflict: pigeons were easy to transport, ate very little, and could travel long distances in often extreme circumstances.

Pigeons carried their messages either in special containers attached to their legs, or small pouches looped over their backs. When not relaying messages, the pigeons were kept in mobile or stationary lofts, and were trained and cared for by skilled handlers.