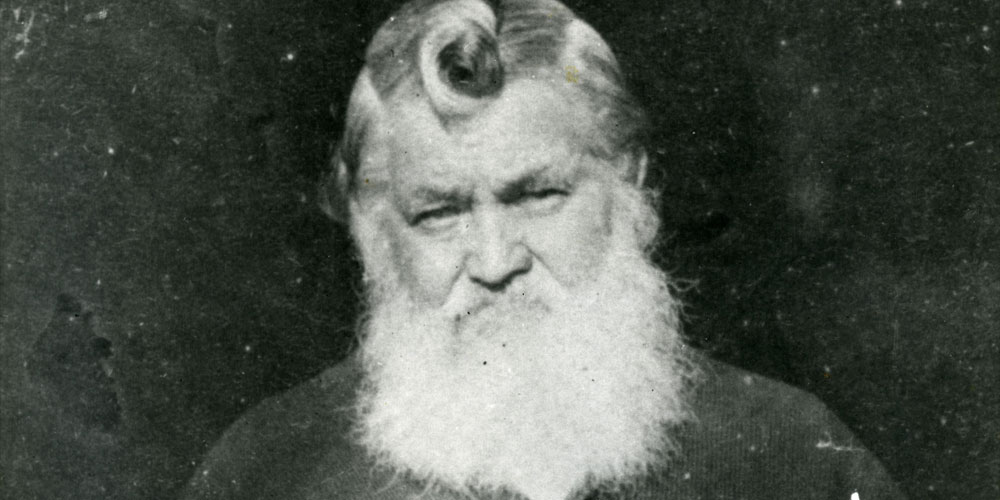 He is honoured in the naming of Walter Hay Drive which is approximately five kilometers long and extends from the Sunshine Motorway to Eumundi – Noosa Road.

Born in Aberdeen, Scotland in 1833, he lived out most of his life in the district, passing away in 1907 and is buried in the Tewantin Cemetery.

He settled in the Wide Bay area in 1855 and then relocated to the Tewantin area in 1870 – 1871. He lived in the Noosa Heads area for over thirty years.

His first wife was Elizabeth Eaton and together they had ten children. What a shock he received when returning home from one of his bush excursions, he  saw a newspaper article saying his wife had died while giving birth to twins. In fact, he had missed her funeral. No one had known how to contact him beforehand. Later he remarried and three more children were born.

Renowned for his knowledge of the Gympie and Noosa districts, he pioneered Hay’s Track in the 1870s, a short cut, from Noosa to the Gympie gold fields. Miners could disembark at Noosa and follow the track. Coaches carried mail along this route as well. This route was promoted as being shorter and more convenient than the routes from Maryborough or from Brisbane.

Walter believed that Noosa could become a great port and would develop into a tourist resort. The Noosa Bar, however, would always be too dangerous for a great port; whereas tourism became a world success story.

He also promoted the possibility of a rail link to Noosa and the construction of roads and bridges. By 1886 he was one of the largest landowners in the Noosa district and busy with land dealings of large selections that he was not always able to hold.

He built Bayview House which was advertised as a boarding house in the 1880s with visitors travelling from the rail link at Cooroy by coach and by boat from Tewantin. The building was replaced in the 1930s by Hillcrest Lodge and in 1958, purchased by the Anglican Church and renamed Halse Lodge after Archbishop Halse.

Present-day Laguna Lookout was once part of his land and known as Tingarana Lookout which meant views of the sea and part of a large block with magnificent views. Noosa Sound development opened in 1973. It was once known as Hay’s Island, a sandbank in the Noosa River. Beacons were set up there and at the end of Hastings Street to guide ships and Walter set up a market garden providing a local supply.

He was the first landowner in Hastings Street and the first to live at the South Heads while promoting development of the Sand Spit. In 1882 Walter bought three allotments in what was to become Hastings Street. The cost of each was approximately four to six pounds. Land at the Sand Spit was subject to severe weather just before it was offered for sale and did not attract buyers. A public reserve was established and by 1885 allotments were sold.

Hay leased land along Weyba Creek as well as owning the major part of Noosa Junction and Noosa Hill. Unable to pay the leasehold these properties were lost.

Wallace Park is part of the original block of 134.4 hectares of land in Tewantin where Walter lived with his family until he relocated to Bayview House.