Dress up like a ninja, bathe in the sand or forest, eat the most amazingly fresh sushi, or meditate at a shrine but do take the opportunity to try something outside your comfort zone and dive deep into Japanese culture.

Here are nine surprising experiences you will only find in Japan 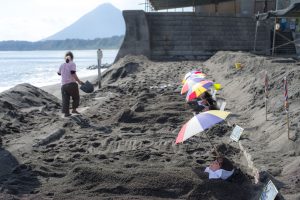 Immerse yourself in the volcanic sand.

Forget the sauna or even the sea, sunamushi, or sand bathing on the southern tip of Kagoshima is the ultimate healthy experience. Volcanic hot springs line the coastline of Ibusuki, warming the sands to about 50-55 degrees Celsius. Resorts along the coastline offer a sand bathing experience with regular hot springs to soak in afterwards. You wear a light cotton yukata to sand bathe and lie a shallow depression on the beach. The attendant protects your face with a towel and shovels warm sand over you until you’re buried, up to your neck, in the black sand. Only your head is exposed to the air. After ten minutes or so, you emerge warm and relaxed. Then, you can shower at the beach or explore the nearby hot springs.

Cut a hole in the ice, admire the snow-kissed mountains, dangle your fishing rod and try smelt ice fishing in Mt. Akagi. It’s worth the effort. Your catch goes straight to a nearby restaurant to be turned into delicious golden tempura.

Summer is also one of the main seasons for festivals in Japan. Akin to Mexico’s ‘Day Of The Dead’, Obon (also known as The Bon Festival) is one of the largest summer festivals where Japanese people pay tribute to lost ancestors. In Nagasaki, there is the Shoro-Nagashi ‘Spirit Boat Procession’ where boats are painstakingly decorated by the grieving family members of the people of Nagasaki who died that year.

Stay in a ryokan

Ryokan or Japanese inns is where you will find rice paper shoji doors, tatami flooring, futon beds and natural hot spring baths. Catering to all budgets, they can be found throughout Japan but most commonly in the countryside outside urban centres.

Wakayama prefecture’s Ryokan Musashi is consistently rated as one of the top onsen ryokans in all of Japan. Some rooms even boast a private hot spring tub with ocean views. 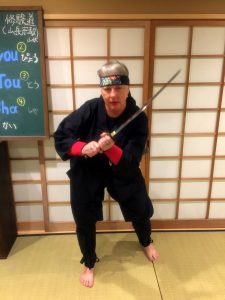 The location of the Ninja Do training hall in Sapporo is strictly on a need-to-know basis to confuse their enemies. Students arrive on kerbside to be greeted by a man dressed head to toe in black and ushered into an unmarked building. It’s straight down the stairs to a basement door with a large lock on the outside. It’s all very mysterious and slightly dramatic like you are extras in a Monkey Magic (a classic 1970s television series shown alongside The Goodies and Roger Ramjet) remake.

Next, there is a lot of clothing to put on and tie up. Pants, top, headband and wrist guards and then suddenly you look like a ninja! Then you learn to walk silently and swiftly, blow a dart and a ninja star into a target and escape from your enemies.

Relax and recharge at a traditional tea ceremony

The tea ceremony tradition has remained a cherished Japanese ritual for centuries, bringing people together in an environment of tranquillity to enjoy freshly whisked matcha tea. Shizuoka is home to some of Japan’s best tea and the beautiful surroundings just below Kakegawa Castle. Ninomaru Teahouse is one of the best places to experience this meticulous tradition.

At ancient shrines and in the heart of historic cities, Japan’s rich cultural heritage lives on as something not just to be admired from afar but actively appreciated. Home to the Soto school of Zen Buddhism, Hakujukan is a ryokan-cum-temple lodge in Fukui prefecture. Here guests get a taste of traditional Japanese hospitality and can join monks at the monastery for a Zen meditation session.

Sushi is probably the most recognisable Japanese food and has exploded in popularity worldwide. For under 600 yen ($7), you can walk into any supermarket in Japan and pick up fresh sushi. You can also spend upwards of 60,000 yen for a three Michelin star omakase (chosen by the chef) course.

Forest bathing or ‘Shinrin-yoku’ is a centuries-old tradition where you immerse yourself in nature. It took off in the 1980s when busy, over-stressed city workers needed help to wind down and re-calibrate. It offers an eco-antidote to tech-boom burnout and inspires people to reconnect with and protect the country’s forests.