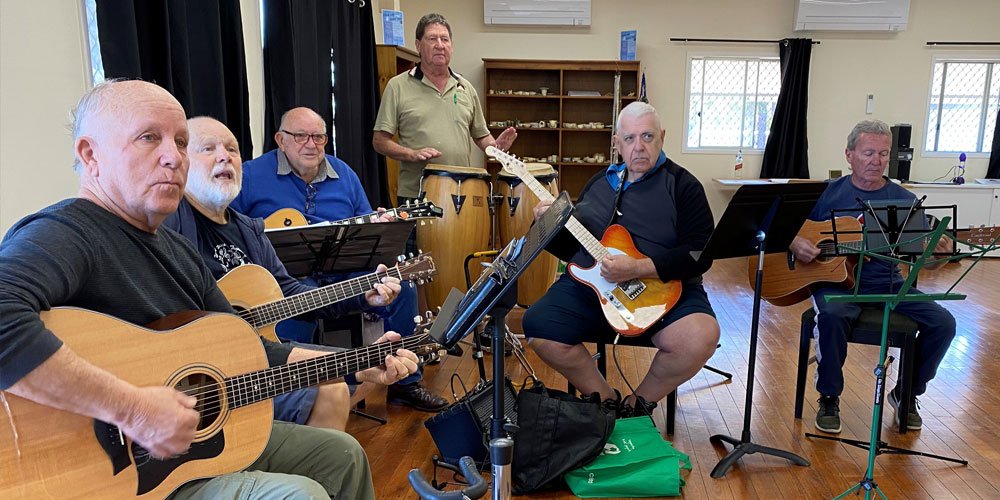 It seems you can take the man out of music for a while, but you can’t take the music out of the man – and so a talented group of former musicians have turned the former Coolum Community Hall into their own little slice of musical heaven.

Situated next to the original Coolum Men’s Shed in the town’s industrial estate, the old hall – moved by the Sunshine Coast Council and refurbished by the musos – now reverberates with the sound of electric guitars and drums every Friday morning as the lads get down to practice.

And this is no passing whim. Some of the men now perform for appreciative crowds at the local RSL and they are even cutting an album.

One of the driving forces behind the initiative is former music teacher and educator of 46 years RoscoE Baldwin, 70 – and no, that capital “E” is not an error. RoscoE added it on himself as his electronic signature a few years ago.

He says he and the other band members are all retired, “but not from life of course”.

While they all now live on the Sunshine Coast, they have come from a variety of careers and locations around Australia – yet have that common love of music, from classical to rock.

RoscoE in particular has a talent for writing music and has written plenty of songs for the children he has taught in the past. He is now composing original works for the group, which also covers many popular Australian artists such as John Williamson.

Names for the band can be a bit fluid depending on how many members get together for gigs or recordings. For example, Nerds comprises Nev Rayner, Doug Harbrow and RoscoE; while RoscoE and Bob Barford (formerly of Proserpine who plays guitar, violin and mandolin and sings) use Double Up when performing at the RSL as a duo.

The groups have already recorded two songs at Sleepwalk Studios run by Aaron Giffin at his home in Coolum, and have a presence on YouTube.

Former Coast tourism and aviation guru Rob Tonge was a member of The Planets band in Brisbane many years ago.

RoscoE says the mental and physical benefits of learning and playing music together are a huge bonus for the men.

“And the camaraderie is excellent. They are learning new skills and going pretty well. They also get the interaction at lunch on Fridays,” he says. “You can chew the fat or saw a bit of wood. It’s going from strength to strength.”

Of the musicians among them, splinter bands are forming. One song recorded during the Covid lockdown pulled three of them together.

Personally, RoscoE says, he’s “a mad country rock fan” who began playing drums at the tender age of 12. His latest love is a set on bongo drums which someone had sitting in a shed and donated to the group.

He says he always has songs playing in his head and often gets up “at ungodly hours” to write down some of his inspirations.

“This particular thing (the band) is like a plant. It’s wonderful. It just grows. It’s beyond words – physically and emotionally, it just lives by itself,” he says.

“It’s a whole escape from problems etc and there’s that camaraderie. That’s the one thing with the Men’s Shed, it has men’s welfare at its core. It’s that something to look forward to.”

Rob Tonge, 82, who was lead guitarist for The Planets in the late 1950s, said he left that band to go into aviation and, to his regret, gave music away.

“I took it up again several years ago. It was the silliest thing I’ve ever done (giving it away). My fingers won’t do what they used to, I cheat a little bit,” he says. “When this group started I thought great. I look forward to this. It keeps me busy and keeps me mentally active and with a positive attitude and sense of humour.”

Rob said he had always played by ear and not long ago thought he would try and read music, but found it too hard, so he’s back to playing by ear.

A long time sufferer of prostate cancer who now heads up a Queensland support group, Rob believes that music has been an enormous help in getting him through.

The Men’s Shed publicity officer and fellow muso, Doug Harbrow, 66, says the group has grown exponentially from its early beginnings eight months ago as more and more ex-musicians hear about it and come along to play.

With a former life in paramedics and biological science at Queensland University, Doug describes his contribution on a range of guitars as “a selfish indulgence”.

“It’s the best time of my life – stopping work and playing music and going somewhere I can indulge myself,” he said.

See the boys in action in the Coolum Men’s Shed video on YouTube. Watch it here www.youtube.com/watch?v=fFZn3zoMW54