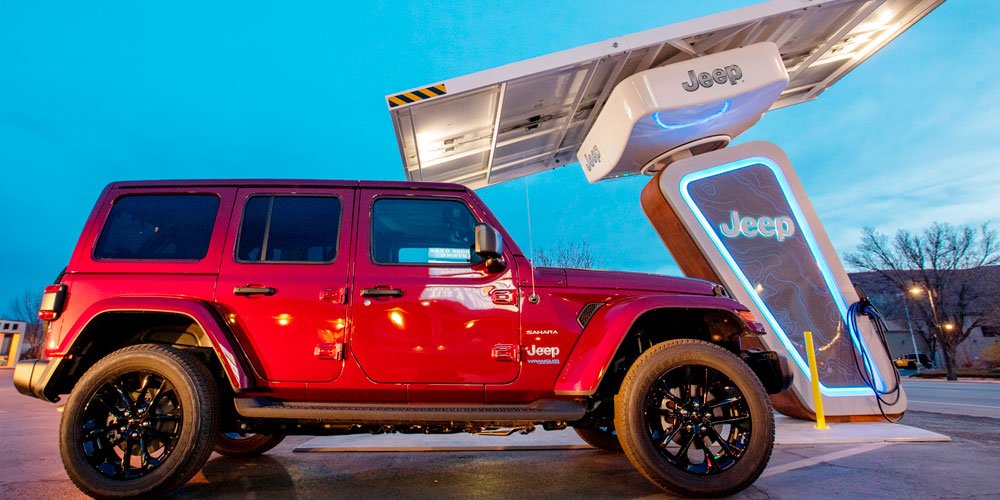 While the petrol-electric Wrangler 4xe is said to run at four litres per 100km, the 6.4 litre V8 probably costs at least three times that in fuel consumption to rip on down the road or up the bush track.

Both are claimed to be excellent off-roaders though the plug-in Wrangler 4xe, and its one petrol and two electric motors, is claimed to be both the most off-road capable and the most eco-friendly Jeep on the planet.

The four-door 4xe has a combined power output of 260kw and 600Nm of torque which would be a handy combination for slow and steady four-wheel drive work, and electrification further improves the Jeep’s renowned off-road capability, especially at rock crawling speeds.

Back on road, this 4xe Jeep is claimed to sprint from 0 to 100km/h in  six seconds. It has an all-electric range of around 40 kilometres, full battery charge can take less than three hours plus it can regenerate supply when coasting or braking.

Behind this Wrangler’s traditional seven-slot grille is a 2-litre, four-cylinder petrol engine with twin scroll turbocharger.

At the front of the engine sits a high-voltage generator that replaces a conventional alternator and is then connected by belt to the engine’s crankshaft pulley.

Along with providing extra torque for the conventional engine, this manages the start-stop system while generating electricity for the battery pack.

A second high-voltage motor generator at the front of the Wrangler’s transmission case replaces the conventional torque converter of an automatic gearbox and is built into an eight-speed automatic transmission.

This is another step in the 80-year-old American marque’s move to electrify their entire fleet of four-wheel drives and follows on from the introduction of Renegade and Compass 4xe models.

Part of that move includes charging stations at “trail heads” in four-wheel drive playgrounds in the United States.

And for the diehards, there’s always that V8 petrol Wrangler.

Neither of these two Jeeps are earmarked for Australia at this stage but the Wrangler 4xe does foreshadow a burgeoning move in the US for the electrification of utes and four-wheel drives.

Ford has the all-electric F150 Lightning, General Motors is reviving the Hummer badge with an electric SUV while the Rivian and Bollinger utes are credible challengers to the Tesla Cybertruck contraption; the Rivian promises 560kW, five-tonne towing and a 640km range.

Alongside these all-new, ground-up designs there’s also a growing US movement to retro-fit electric drivetrains into classic cars, utes and four-wheel drive wagons.

There’ll be more opportunities to commune in peace with nature in an electric four-wheel drive, and instant torque offered by electric motors should be a boon for rock climbing, but for now Simpson Desert treks will maybe necessitate adding a little petrol-powered generator to the load for powering up the next sand dune.

Meanwhile Jeep in Australia is celebrating the 80th birthday of a brand which traces its heritage to World War II with a limited, 130-vehicle run, of dressed-up (and petrol-powered) Wrangler Unlimited Willys.

By the numbers – where you fit into retirement
How old are you, really?