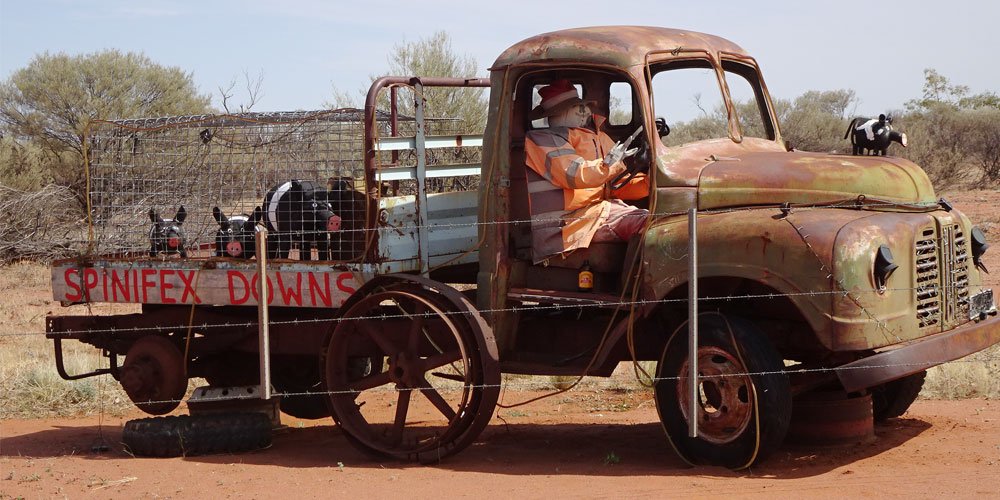 Take a drive on the Barcoo Way skirting tranquil billabongs with backroads showcasing prime grazing land through Tambo (famous for Tambo Teddies), Blackall (art and cultural hub of Central Outback Queensland), Isisford (home of the Yellow Belly country), and Yaraka (opal mines and two national parks nearby) and you come to Windorah.

The Barcoo and Thompson Rivers join here to form a creek, the majestic Coopers Creek.  Sometimes if you stop a while, you will discover little treasures.

Windorah has a population of about 80 and was gazetted a town in 1880. Its first police station, school and post office came a year later and the telegraph line in 1885 to connect the Outback to the big smoke.

It now has a police station, primary school, two council-owned caravan parks, the Windorah Outback shop for groceries, two fuel stations, a Western Star Hotel Motel and restaurant next door and one of the best tourist information centres you could find.

The woman at the info centre was knowledgeable and helpful, and guided us to wonderful experiences around the town including the red dunes at sunset and free bush camping on Coopers Creek just outside of town.  She also suggested extending our drive to Jundah and Welford National Park on the Barcoo River, where Mitchell grass plains and arid mulga woodlands, spinifex and ghost gums make a distinctive landscape.

Windorah’s water is pumped from Coopers Creek just 10km out of town.  Its main income is primary industries, mining and tourism.  Apart from the red sand dunes it is quite flat and is only 136m above sea level. 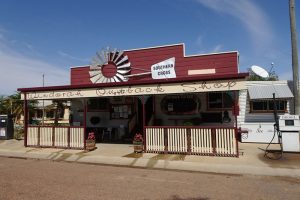 The Art Garden walk in town features local flora, sculptures, and mosaic artworks.  Just down the road is the drinking water and dump point.  We filled our tanks as the water was excellent.

The town was named by the local Mithika people and means “big fish”.   Yellow belly is sought after here, along with the tasty red claw.

Heading to our camp on Coopers Creek , we travelled the 12km Nature Drive developed by the community to give tourists a better understanding of the natural state of the land and its flora where shrubs and trees have been tagged to help identify the species.

The statement on their brochure is worthy of note: “Take nothing but memories and photographs.  Leave nothing but tyre tracks and footprints.”

We camped on Coopers Creek for two nights and had a choice of spots either side of the Cooper Bridge.  The location is peaceful and pleasant, with views of fishermen in their punts, pelicans floating by and parrots landing in the coolabah and acacia trees.

It was private in most locations and open fires are permitted.

Just out of town is Ergon Energy’s first solar farm, established in 2009.  The five mirrored dishes 13.7m across reflect sunlight radiation to high capacity solar cells.  Each generates about 26kw of electricity, depending on the weather, time of day and cloud cover.

It has a capacity to generate 360,000kw of electricity each year; power that would otherwise require 100,000 litres of diesel to run the town’s generators.

Windorah has two caravan parks with all the usual facilities and is very reasonably priced.

If you are bush camping out of town or just passing through, you can access the coin-operated washing machines, a real treat at the end of a dusty road.

There is a lush green public park with toilets and taps, shaded picnic tables and even a flyscreen enclosure for peaceful eating.

This little town has everything a traveller needs.  The grocery store even sold home grown vegies –we bought two punnets of juicy fresh cherry tomatoes grown by the shopkeeper.

It is always worth stopping to have a chat with a local or pick up a brochure to discover something special and particular to the town – and often the tidbits of history that we didn’t learn at school. 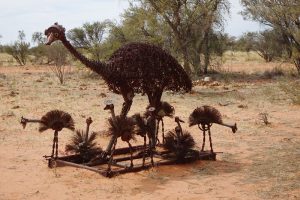 Cooper’s Creek was named by Charles Sturt in 1845.  In Sturt’s own words: “I gave the name of Cooper’s Creek to that fine watercourse we had so anxiously traced, as a proof of my respect for Mr Cooper, the judge of South Australia.  I would gladly have laid this creek down as a river, but as it had no current, I did not feel myself justified in doing so.”

Mapmakers have in more recent times dropped the possessive “s” but residents are determined to preserve the historical as well as the natural heritage of this magnificent dry river.