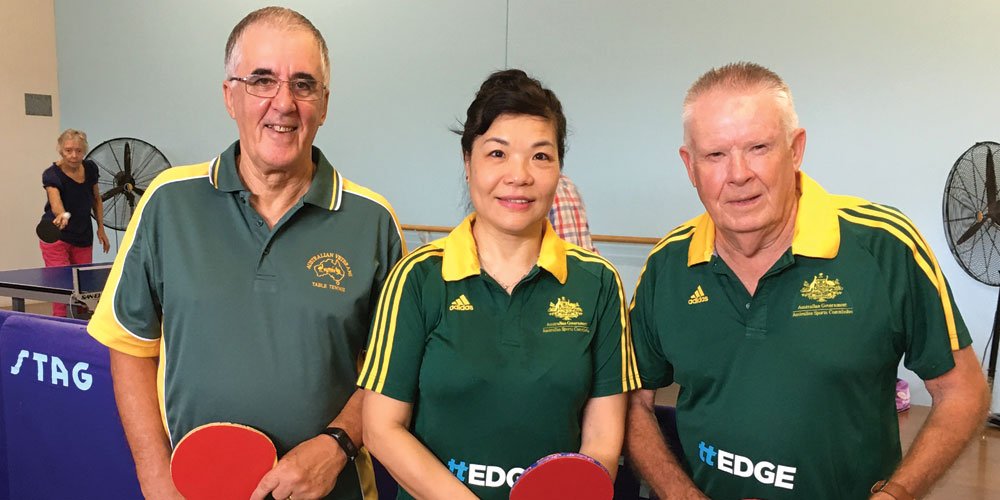 Forrest Gump elevated the sport to a new level and now that age-old favourite, table tennis, is enjoying a resurgence with seniors who are rapidly realising its benefits for both mind and body.

Members are signing up to clubs and veterans’ championships are attracting talented players who travel throughout Australia and overseas to compete against the best of their peers.

Enthusiast Ken Hay, who began playing when he was 15 and is now a superfit 78, is one of the sport’s greatest advocates, saying its health benefits are enormous.

“Playing table tennis can pump the heat out and get the heart going,” he says. “The sweat you lose helps with weight loss and the heart will be trained to pump at a higher rate and will become more efficient in providing good blood circulation.

“It’s not only the hands, legs and body that work, but also the mind.

“In a split second a decision is made. Every action is calculated in the brain and sent to the body to execute. This game involves total mind and body coordination.”

And as Ken also points out, it’s a sport that can be played out of the sun and in any weather – in fact being indoors has distinct advantages as he and his club discovered when asked to play some exhibition matches outside on a windy day. They spent a lot of time chasing after that devilishly light, little white ball.

“Yes, it was like having an ashtray on a motorbike,” quips a player.

Social table tennis and learn-to-play recently started in the Nambour area headed by Ken, who uses his daughter’s dance studio, when she is not using it for dance classes, as a base.

If you ever had a hit of table tennis – or ping pong as many of us called it – years ago, then now might be the time to try again. But be warned, those little paddles or bats have changed a lot over the years and if you are a serious contender then these days it’s all about the “dimples” or “pimples” on the bat’s surface.

“There’s a lot more to it than hitting a ball over a net,” says Ken. “Over the years it has changed a lot – since the ’40s and ’50s when everyone had a table tennis racquet. Rallies used to go for ages.”

Changing the pimple surfaces and the rubber backing on the bats has turned the game into one of tactics and briefer rallies – sometimes just three or four passes over the net compared to dozens.

The International Table Tennis Federation set some rules when the Chinese began using extremely thick rubber which caused the ball to simply drop over the net when hit hard. The rubber thickness has now been reduced officially to 2.5mm.

“It’s all about strategy. It’s a game of wits.”

With today’s rulings, one side of the bat is black and the other side is red with different combinations of dimples.

Ken proves just how healthy the game is by pointing to a member who had a stroke and used the sport as rehabilitation to regain his co-ordination.

“He was playing competitive social games again within six months,” he says.

Ken, who worked as a cartographer, took early retirement with a redundancy but when he needed more money, he began a trophy making business which he ran for just over six years until suffering a sudden and severe heart attack at 64.

“I had a 99 per cent blockage in my right artery and 75 per cent in my left. I flatlined for four minutes before they brought me around,” he says.

His ribs were cracked during CPR and using a defibrillator. He says the nurses and doctors were cheering when he finally came to.

“You have to keep moving as you get older,” Ken says. “You can live longer playing table tennis.”

Brisbane Table Tennis Association is based at 86 Green Tce, Windsor. Social play is Monday, Tuesday and Thursday 9am-noon.  Free introductory session and bats to borrow.
Call 3357 8992 or visit brisbanetabletennis.org.au. Play has been suspended during the health sanctions. 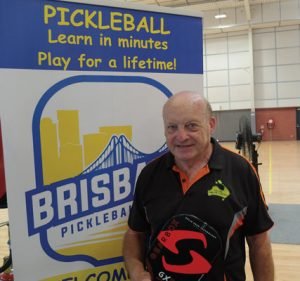 James Sharley is now a board member of Pickleball Australia, the National governing body.

With a dash of table tennis, a hint of badminton and a serve of tennis, pickleball is easy to learn, fun, and, according to players, highly addictive.

And if you have never heard of it, that’s not surprising as it arrived in Australia only two years ago, in late 2017.

At the vanguard of the sport in Queensland, James Sharley stumbled across the game while holidaying in Spain three years ago – language is not a barrier to playing – then returned home to discover there was a centre near his home.

“I was drawn by the laughter,” he says. “I was on the court for 20 minutes that first day and I’ve not stopped going back. There’s no sweating, no aggression. It’s just fun.”

He notes that when you make a good shot in pickleball, it is usually your opponent who congratulates you.

The game is played on a badminton-size court – or about one-third of a tennis court – using a paddle and a hollow ball with holes in it. Called a wiffle ball, it looks like a larger version of the cat toys that have little bells inside.

“It’s like playing table tennis on the floor and is generally played as a doubles game so it’s very social,” James says. “The rules are peculiar so it’s not tennis.”

To ensure there are no blistering aces, the serve is underarm. It requires strategy rather than power.

The ball must be allowed to bounce on the first and second returns but can be hit on the full after that. There’s also a non-volley space either side of the net, so no slamming.

There’s no need to fear for creaky knees, as play moves forward and back, and there’s no call for twisting and turning or causing stress to knees and ankles.

“You can self-regulate to avoid stress on the joints,” James says. “There are two risk factors – running backwards and hydration – but that’s about it. Physios and rehab therapists are recommending it.”

He emphasises the game is more about placement and accuracy than strength and hard hitting.

“A few of our players have played tennis and squash before but most didn’t have any racquet skills at all, and some tennis habits need to be ‘unlearnt’,” James says. “Scoring is similar to table tennis and points are won only on the service.”

Players can pace themselves, as the average doubles match – and it is generally played as a doubles game – takes about 15 minutes.

“It’s a small court but it’s still an aerobic workout,” he says. “It’s not as sedate as croquet.”

The other advantage is that it is usually played indoors and protected from the weather, although with pickleball’s growing popularity more venues are needed and James said this could lead them outdoors.

Apart from its addictive qualities, pickleball attracts the 55+ cohort because most venues currently are available only during the day.

And many of its proponents discovered the game while on a cruise as it is a popular deck sport.

The game itself also suits any level of fitness, so can be played at various skill levels regardless of age.

“You can skill up if you want or just have a lot of fun,” James says. “You get what you want from it.”

The oldest member at last year’s championships was 83.

The proof is in the pudding. There were 60 at the first Australian championships in 2018, 160 last year and more than 300 were expected this year, although all games are now off until the health sanctions are lifted.

James has delivered his introductory talk to 159 newcomers – only one didn’t return for a second session after the first free games.

“The joy for me is watching a new player because within 10 minutes you can see the confident smile,” James says. “It’s simply addictive.”

There are six pickleball venues in Brisbane, at Nathan, Coorparoo, Albion, Chandler, Bracken Ridge and Everton Hills.  Play has been suspended until April  30, and will then be reassessed. 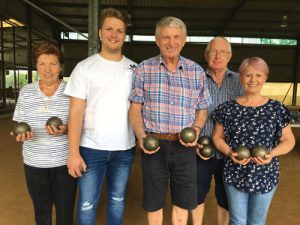 If you’ve ever been intrigued by photos of people throwing silver balls on to a grass or sand court and wondered just what they were doing, the answer is playing bocce.

An Italian game, it is also known as pétanque and sometimes boules.

And while it may look like a gentle pastime, it can be excellent exercise for mind and body and a great way to make new friends.

Players can be as social or competitive as they choose.

Italian-born Egidio (Eddie) Fratus, 76, who has lived on the Sunshine Coast for 39 years and took up bocce in 1991, is one the sport’s greatest advocates and as vice-president, helps run the Woombye-based club which has 80 members around the region.

Invented by the Romans and often considered Italy’s version of lawn bowls, bocce is now played around the world and as well as being good for fitness in keeping bodies moving and bending, it is also highly entertaining.

The Coast club has its own undercover, decomposed granite bocce courts which are maintained by members, as well as an adjoining licensed clubhouse where members can play cards and enjoy meals and socialising.

They also organise annual trips to places like the Stanthorpe Wine Festival and Toowoomba’s Carnival of the Flowers.

It is similar to bowls, except the heavy, usually brass-based balls have no bias which makes the contest more like a game of oversized marbles. The green is also shorter and narrower than lawn bowls.

The balls can weigh anything from 900 grams to 1.2kg and are rolled towards a boccino (smaller ball), with the closest being the winner.

Ian says the game is so user friendly that one of their 94-year-old members who had a hip replacement was able to resume his bocce game just four weeks later.

“It’s a very social, interactive game and there’s a serious side and a social side,” Ian says. “It keeps you on your toes … there are arguments and it can be frustrating, but it’s good for you.”

The club is attracting younger players too. Luisa Cazzola has lured her 20-year-old grandson Paul Currie to join her.

Paul says he enjoys both the social and competitive side of the game, as well as being able to play with family.

Eddie said the Sunshine Coast Council had been a big help in providing grants to keep the club ticking over.

“A lot of nationalities and ages play, but it’s mainly seniors over 65,” he says.

There are clubs at Brisbane Southside Club and at Deception Bay and a Redlands Bocce Club.