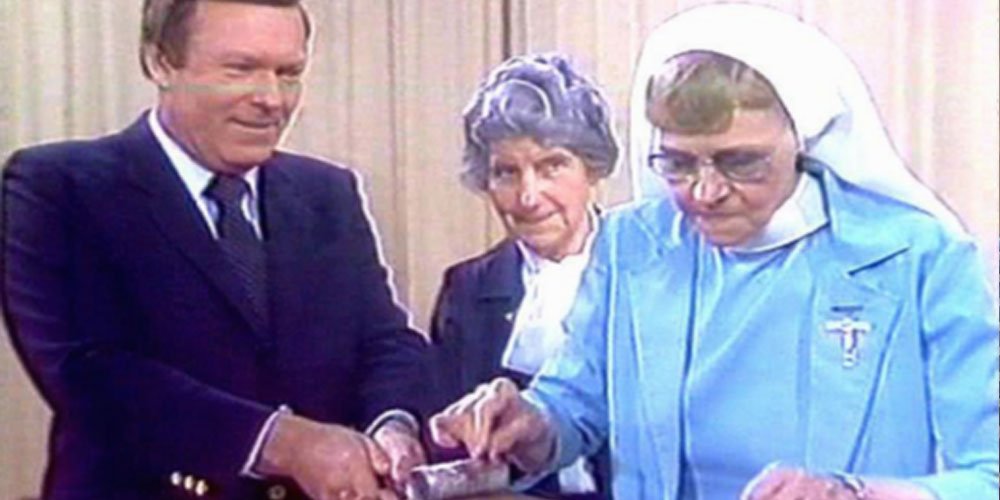 Stanny was a popular nun. Her real name was Sister Martha Stanislaus and before that it was Martha Zgrajewski. She was born in 1911 and died in 2015 at the remarkable age of 105.

In 1939, she became a nun taking the name Sister Stanislaus after a Polish saint. For more than 60 years she worked as the cook at Southport Girls Boarding School.

On her retirement, she lived at Holy Cross, Wooloowin, still treasuring her traditional nun’s garb, the penguin suit, and wishing it was never changed. She was always quick to add that everyone called her Stanny.

In 1985, television host Mike Walsh invited her to appear on his show and described her as the ultimate in hilarious entertainment.

Her bizarre routine included playing a range of whacky instruments such as the bush banjo consisting of a rusty kerosene tin, bits of wire and a broom handle, also mutton bones, lagerphone, zither, mouth organ and kazoo – sometimes all at the same time.

No doubt these instruments were a legacy from her Yandina Creek days.

She was a notable entertainer for charities. In 1980, the Bundaberg News-Mail reported her musical talents while saying that she came from “the Snake Gully Settlement near Nambour.” They meant to say Yandina Creek.

Stanny received a letter from Queen Elizabeth in 2011, when she turned 100. She said she would have liked one from the Pope but only if he was Polish.

Stanny’s parents, Hipolit and Petronela Zgrajewski, and their son John arrived in Bundaberg from Poland in 1908. They managed to buy a cane farm in South Kalkie where another three children were born and survived – Mary in 1908, Martha in 1911 and Agnes in 1914. There were seven other children, all stillborn.

Isolation and great hardship marked their early days at Yandina Creek where the family relocated to a banana farm in 1921.  One year’s crop boiled on the way to Melbourne and became worthless but the freight was still payable. However, they continued to work hard on the farm and became self-sufficient, even slaughtering their own pigs and calves and preserving the meat by corning, smoking or curing as there were no refrigerators.

The family had a strong Polish Catholic faith and would ride horses all the way to Yandina or Eumundi to attend mass, having fasted from midnight the previous night, the custom at that time.

They were used to making their own entertainment. Hipolit Zgrajewski instilled in his family a love of music and taught them to play by ear such instruments as a zither and an accordion that he had brought from Poland, as well as other musical instruments which he ingeniously made.

At first, the two younger children had school lessons by correspondence supervised by the older children as their mother was unable to read or write English and their father could only read English.

When their daughter Martha (Stanny) attended Lower Doonan Provisional School, the female teacher boarded with the family and not only shared her bedroom but, because of a lack of spare beds, also shared her bed!

The teacher was not too pleased with Lower Doonan and wrote to the Education Department “the bad roads no less than the distances involved prohibit travelling … all of which conspires to render Lower Doonan a swamp-pitted, inaccessible jail.”

John Zgrajewski bought a T-model Ford, a “Tin Lizzie”, to transport farm produce and bananas along the rough bush tracks from their farm to the North Arm Railway Siding. The family also travelled and played in their own band at dances and concerts in the district.

They went into business for short periods, operating a café in Eumundi and running a boarding house mainly for miners from Gympie working the North Arm gold mine.

Zgrajewskis no longer live at Yandina Creek but their pioneering days live on in the name of Zgrajewski Road.