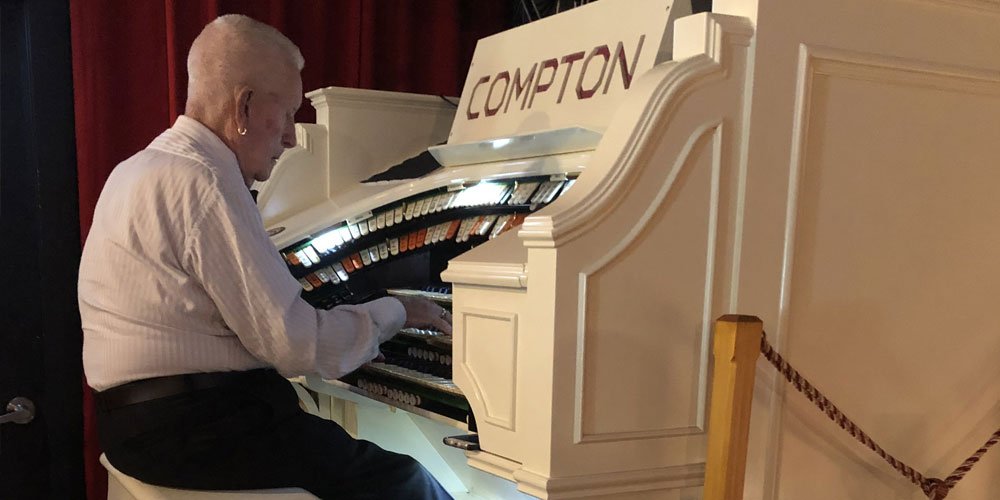 The Majestic Theatre at Pomona – the only theatre in the world to continually show silent films – is 100 years old this year.

The audience is invited to be as rowdy as possible as there is no sound. You can leave your mobile on!

The theatre lost its Wurlitzer organ in the 2011 floods but the Linnett Family Compton organ with its 760 pipes was donated and restored over six and a half years and is now being used.

Ron likes to reminisce: Pomona was once the administrative centre for the Noosa Shire Council. There was also a magistrate’s court, two pubs, an ambulance centre and a police station.

In 1921, Railway Hotel owner Mrs Osborne decided Pomona needed a hall. She borrowed £200 from her mother-in-law and built what is now the theatre.

The timber came from four local sawmills, so it was all local and it has withstood the test of time.

Throughout the 1920s the hall was the place to go for all sorts of events from debutante balls to boxing matches, dances, concerts and, always, the pictures on Saturday night.

In the 1930s it was owned by local residents Harold Page and then Ernie Bazzo.

During World War II the army took over the hall every night of the week to entertain troops camped in the area. The front doors were left open and locals could stand on the road outside, the middle of the Bruce Highway, to look in.

When television arrived in about 1960, it became the greatest threat to community halls and most stopped showing films. Somehow Pomona kept going.

In 1972, Ron worked for the Sydney Film Festival which took films out to regional Australia. The six best films were widely shown but not on the Sunshine Coast. There were enough problems with the Commonwealth censor, so they did not even consider coming to Bjelke-Petersen’s Queensland.

However, Ron asked if the films could be shown in Pomona on the Sunshine Coast. There was a terrible storm, a portent,  when he drove up to meet the owner who had no idea what a film festival was.

The reply was no, he did not need to show incomprehensible films all weekend to an audience of nobody. He claimed he would be left with the bills but Ron assured him he would be paid.

That was the first of 20 film festival showings. Organiser David Stratton, now best known as the ABC’s long-running film critic, was agreeably surprised when the average attendance was 180 people a night.

In 1973, Ron & Mandy West purchased the Majestic Theatre although they found the first few months difficult.

A year later, Ron purchased David Bowie in The Man Who Fell to Earth and it was so popular it ran for six months.  After that, the theatre opened every fortnight, then every week.

Fox Distribution in Brisbane allowed the theatre to show first release films the same time as they opened in the city, which was a popular move.

There was bad news for Pomona in 1985 when twin cinemas opened in Noosa Junction and the local audience drifting away.

A group of travel agents staying at the Coolum Hyatt wanted to watch “something different and nostalgic” so Ron showed the silent film Rudolf Valentino in The Son of the Sheik playing the organ accompaniment himself.

This proved so popular that word got around and everyone wanted to see it. The theatre was booked for two months solid.

For the next 26 years, Ron played to the silent films at the Majestic – 4128 performances of Son of the Sheik alone.

Some believed watching silent films was just a passing fad but in 2021 they are still being shown and are still successful. Patrons love the organ music and the old films; they come back time and time again.

Since 2006, Pacific Arts Inc., a not-for-profit group, have owned and used the theatre as an all-purpose venue, run entirely by volunteers.