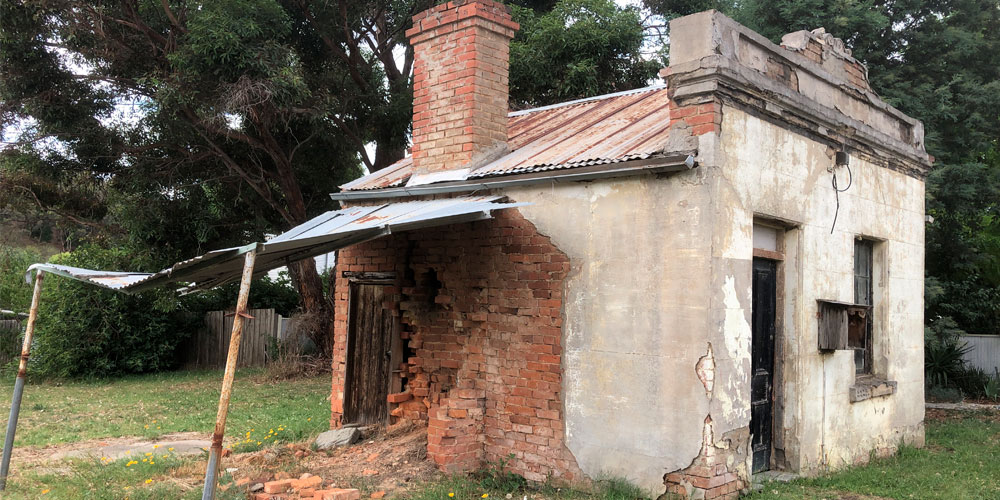 The goldfields feature reminders of the past

I had always planned to explore Australia once I was too old to board a long-haul flight for foreign parts, but Covid brought plans forward – and judging by the number of caravans on the road, plenty of others are doing the same.

While not prepared to venture overseas, I was prepared to venture out in a campervan, a rather old and basic one at that, and follow my nose to who knows where for five weeks. The only certainties were that I wanted to explore New South Wales and northern Victoria and stay west of the Great Dividing Range.

This turned out to be fortunate, as while the east coast flooded, I was safely camped beside picturesque lakes, the mighty Murray River, in pine forests, and near – but not under – giant river gums.

The biggest surprise though, was just how much there is to see along the way. Dorothea Mackellar’s famous lines “I love a sunburnt country, a land of sweeping plains” kept coming to mind, as well as the words of Henry Lawson and Banjo Paterson in countryside that so clearly was their inspiration.

Every small town has a story to tell, and full credit to them, they are all generous in providing street signage to explain their history and points of interest.

Little museums, sculptures, and heritage buildings are in abundance, and it soon becomes obvious that the European settlement that was earlier than in Queensland, has provided a rich tapestry of quintessential Australia.

There’s a drop in temperature on the New England Tablelands where autumn trees in bright reds and yellows and the cool air justifies its name. It’s also home to the Australian standing stones and the Australian Celtic Festival each May.

At Armidale, the Tourist Information Centre offers two-hour tours of the graceful town and its superb heritage buildings that reflect past agricultural wealth.  Further on, there’s the big golden guitar in Tamworth, the country music capital, while 650km south-west at the little Riverina town of Barellan is the big tennis racquet celebrating its place as the childhood home of Evonne Goolagong.

South of Tamworth is Werris Creek, the nation’s first railway town and home to the Australian Railway monument. Train buffs will appreciate the railway museum in the old station building. Learn all about Henry Lawson at Gulgong and Grenfell and join the wine and food trail at Mudgee.

Like many small towns, a 1930s art deco picture theatre dominates Mudgee’s main street, although Leeton in the Murrumbidgee Irrigation Area takes the prize for art deco, with even its water towers duly embellished.

And it’s not just a dog on a tuckerbox at Gundagai. There’s a self-guided walk of the old gaol – many towns seem to have one – a statue of Dad and Dave and Mum and Mabel as a nod to the early On Our Selection radio series which had the theme song The Road to Gundagai, and a statue of the brave rescue of 1852, when Wiradjuri heroes Yarri and Jacky Jacky saved the townsfolk from the great flood.

Even tiny towns hold big surprises. At Harden, is the remarkable statue of the great war horse Bill the Bastard carrying five men on his powerful back, that recalls the epic feat when the stallion rode into no-man’s land to rescue four soldiers during World War I.

Sitting beside the road at Yeoval, Banjo Paterson’s childhood town, is a huge metal version of his hat as well as an abstract sculpture of the head of British sculptor Henry Moore.

There’s the Weary Dunlop memorial in Benalla, and Euroa honours its area’s three Victoria Cross recipients Leslie Maygar, Frederick Tubb and Alex Burton with life-size statues which are part of a military history trail in Strathbogie Shire south of Shepparton. 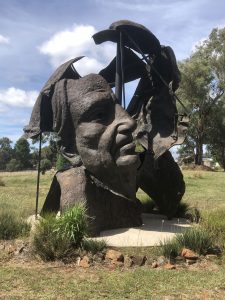 Amazing sculptures appear in the middle of seemingly nowhere

Two fascinating chapters of recent history come to life at the prisoner of war campsite in Cowra and at the Bonegilla migrant camp near Wodonga.

Although little remains at Cowra, its story is told through information boards, a recording on a guard tower, and, even more eloquent, the endless plains that make escape look impossible. There was nowhere to go, but they tried.

It’s a fascinating study of human resilience – for some it appeared they might be back in a German or Polish concentration camp, for others it was a fresh start – and hope for a better life. The centre, which closed in 1971 and is now national heritage listed, tells their captivating stories.

Dominating many towns are huge silos painted with colourful murals. Junee has a chocolate and licorice factory or turn back the clock at dainty tearooms in old Beechworth.

Stories of gold and bushrangers abound. Follow the trail of Ned Kelly from his childhood in Avenel to the shootout in Glenrowan, and see the many towns such as Kyneton and Jerilderie, which also claim a Kelly connection.

Hire an electric bike and cycle the old rail trails, ride first class in the steam train from Castlemaine to Maldon, steam down the Murray River, hike through gorges and wander historic streets.

The only regret was that, with an expectation of lots of long, boring drives through the middle of nowhere, I didn’t allow enough time.

There is nothing boring about the drive, and it wasn’t necessary to cover long distances each day. It just wasn’t possible, as there are so many interesting little spots top stop along the way. And there is so much more to go.

10 reasons why you need to visit Launceston