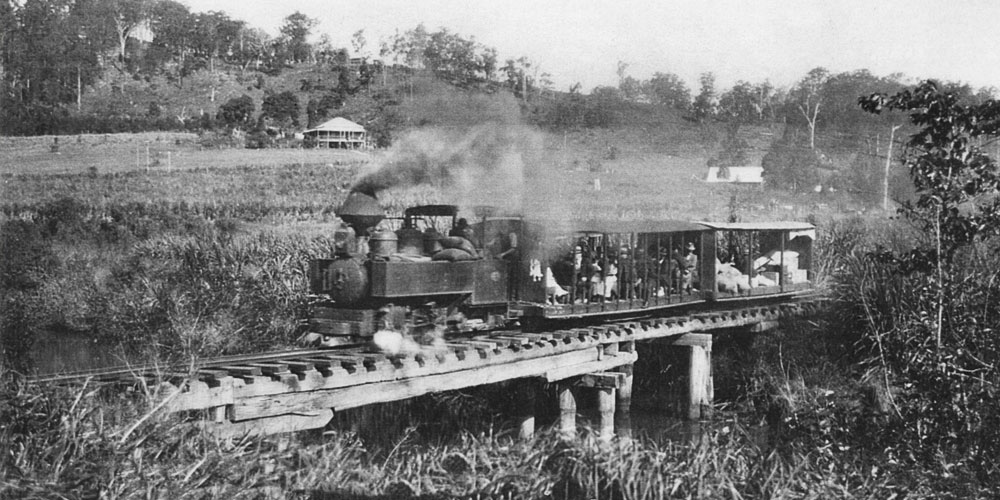 Passengers travelling along Petrie Creek on a weekend excursion. On week days the tram hauled cane to the Nambour Sugar Mill.

The proposed heavy passenger rail link from Beerwah to Maroochydore and light rail from Caloundra to Noosa, such is in the government planning.

It’s a great idea to get people once again going on an excursion by train.

One hundred years ago rail excursions on weekends or on public holidays such as Foundation Day or May Day were the magic carpet ride, often at specially reduced fares.

The Sunshine Coast, known then as the North Coast was most popular. Here was a chance to see green cane fields, to take in fresh mountain air and to enjoy magnificent panoramas of land and sea.

Day trippers from Brisbane, for a return fare of six shillings, could travel 100 kilometres to Yandina. Here the steam engine could take on water and be turned on a forked line. The cost was less if you detrained before then on any one of the exciting side excursions.

Leaving the train at Palmwoods visitors could buy a return ticket on the Buderim cane tram (completed in 1914) for an additional five shillings. One way took one hour through thick bush over bridges and through cuttings. Buderim was a sight for tired city eyes with prosperous farms, orchards and banana plantations.

Disembarking at Nambour visitors could take the sugar mill cane tram to Mapleton (completed in 1915), gloriously on high in the hinterland or they could take the cane tram to Coolum Beach (completed in 1922). Some visitors may have chosen to travel along the Petrie Creek tram line to take the launch service from Deepwater at Bli Bli and go to Maroochydore. Four to five hours were planned at any of the destinations, bathing, sun catching, rambling and, at Coolum Beach, tobogganing.

Both town and city bands sometimes accompanied the holiday makers. They entertained with a program at the station or, as one report stated, on the headland at Coolum in 1925. Some travellers may have stayed overnight for the moonlight excursions on the river or they may have liked a night time journey on the cane tram back to Nambour by 11 pm.

What an adventure it was for those formally-dressed city people to travel in a cane tram, some found seats in special carriages and others sat on six-inch planks in noisy cane trucks that rattled over a narrow line.

Sometimes so many people bought excursion tickets that two trains were scheduled from the city. On one occasion two hundred people journeyed to Yandina from where they climbed over Mt Ninderry enjoying the rugged slopes and waterfalls. By the 1930s buses met the trains and day trippers were able to cram in even more sightseeing. From Palmwoods a bus would take visitors over Buderim to Mooloolaba and Maroochydore and return in time for the evening train. Buses for Caloundra met the train at Landsborough. Similarly at Cooroy, buses carried passengers to Tewantin and Noosa. Sadly the little tramline extensions all closed as road transport increased.

With the opening of the Bruce Highway in 1935, people began driving themselves to resorts which became popular as guest houses and boarding houses offered visitors accommodation.

The very mention of an excursion by steam train brings a nostalgic smile to many of us. It was a leisurely way to travel and who knows someone may be there at the end of the journey offering us a cup of tea or at least offering some hot water to go with the billy and tea leaves we always carried.