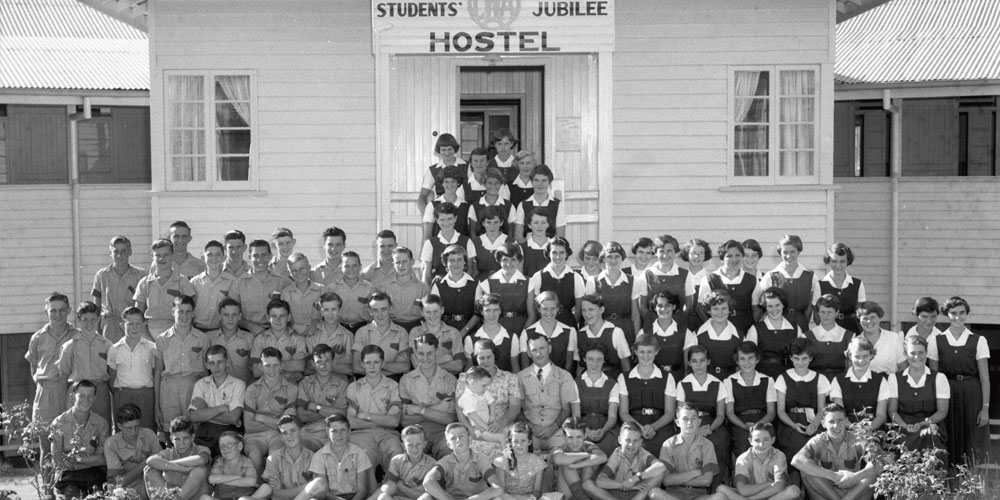 Students at the QCWA Hostel in Nambour in 1954. It opened in 1951 and accommodated 122 students attending primary, secondary, technical or rural school.

The QCWA was founded in 1922 by Ruth Fairfax who was later awarded an OBE for her commitment to community. Her leadership was described as inspirational.

As founding president, her own words were: “In our association we are a great sisterhood of women and a democratic one, putting aside petty difficulties of position, wealth and pride. We are out to be a mutual help to one another, the town to the country and the country to the town and there is plenty of room for improvement in this way.

“Branches meet together every month socially and to discuss the affairs of their district and help to further its interests, trying to break down the barriers that have gradually arisen between people and do away with suspicion and the fear of being belittled.”

Monthly meetings in communities in remote or town areas were opportunities for socialising and learning new skills.

Groups often met in public halls until their own buildings were financed. Women “came for the day” or at least until school was out and they needed to leave to collect children. Morning tea, lunch and afternoon tea were offered in between their regular meeting, listening to guest speakers, and learning or exhibiting arts and crafts.

Women’s welfare and health were important. Some groups offered house-keeping relief when there was sickness in a household.

Rest rooms were established in towns to assist women especially those with young children; holiday cottages were made available when the need arose.

The building of the Maroochy District Hospital in the 1920s was made possible by the charitable donations of groups like the QCWA. Minute books show the quota that each group on the coast met to help this cause.

During World War II, many members supported the Australian Comfort Fund making and sending hand-knitted garments and food hampers to soldiers overseas. They even made camouflage nets. Food and clothing were collected and sent to a needy Britain. 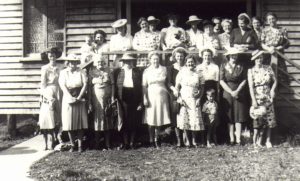 Peachester CWA ladies in the 1950s.

In the 1930s, young women were encouraged to form a CWA Younger Set with the same aims as the parent body. Leadership, socialising and fund raising for charity were encouraged.

QCWA branches in the 1950s raised funds for the building of a student hostel in Nambour at a time when Nambour High School was the only secondary school on the Sunshine Coast. Opportunities were then available for children from distant parts of the coast to further their education.

Where possible, CWA groups cater for local events, not only providing a service to the community but fundraising for local charities and deserving groups such as local schools. People affected by floods, bushfires, cyclones and droughts have been supported.

Each year a different country is chosen for study, furthering cultural exchanges and education.

Their ideals have been shown to be selfless and rewarding, caring and working for local projects, bettering the lives of those less fortunate.

The QCWA centenary is being marked in many ways.

Cooroy CWA Branch hosted the State Centenary Commemoration on July 1, with a lunch for 90 people. Members compiled “A History of the State”.

The Nambour Museum and Peachester Historical Society have ongoing displays featuring the history of local CWA. Peachester’s title is “A woman’s work is never done”.

Yandina has had a special morning tea with guest speakers.

We can applaud their 100 years of service and their aims of tolerance, unity, service and faith. Go girls!