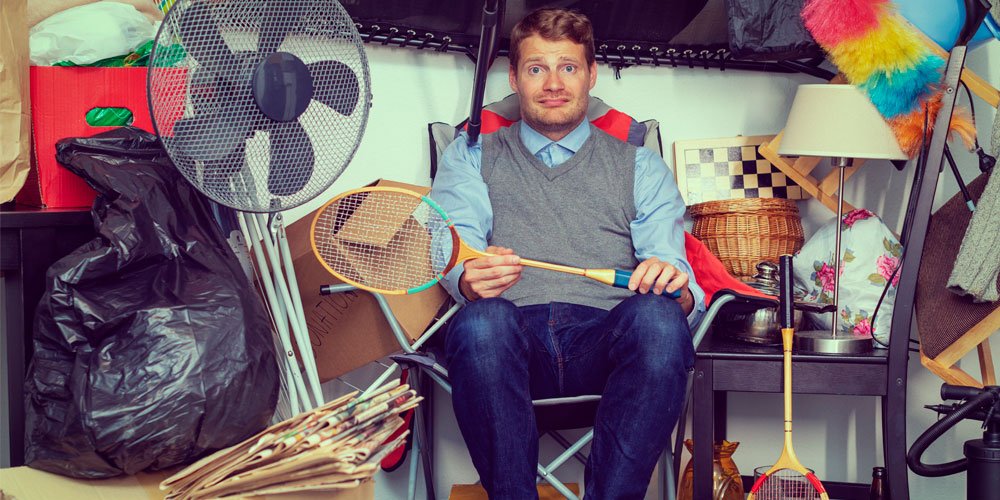 “Waste not, want not” was the mantra of Louise’s parents – she remembers growing up with a mum who saved every bit of string and even rewashed plastic bags.

Her dad had a shed full of rusting tools and a paddock of clapped-out farm machinery which had long since had its day. But when does saving everything “just in case” become clutter? And good intentions of re-reading that old newspaper, re-wearing that old dress or finding a use for that stained linen, become hoarding?

We’ve all heard the horror stories of a body being found under piles of hoarded bits and pieces in someone’s neglected home, or authorities being called to rescue a person from mounds of newspapers, books and household items.

Yet it seems many of us have that bowerbird tendency of hanging on to something long past its use-by and useful date, whether it’s a once-favourite handbag that hasn’t been shopping for years; clothes that don’t fit or you really don’t like; dog-eared paperbacks; fusty magazines; kitchen utensils and appliances; old children’s toys; broken gardening equipment … the list, of course, is endless.

Decluttering will often create emotional and psychological space as well as the physical space, according to psychologist and author Judy Rafferty who is a great advocate of having an annual clean-out. But a major tidy-up and spring clean is still far short of the very real psychological problem of dealing with hardcore hoarding,

According to an instructor in psychology at Harvard Medical School Dr Jessica Rasmussen, TV shows such as Hoarders and Hoarding: Buried Alive have publicised the rarest and most extreme form of hoarding – homes filled floor to ceiling with piles of boxes, knick-knacks and pest-infested rubbish.

Severe hoarders can accumulate so much that they render their living spaces unusable and even dangerous.

She says anywhere from two to six per cent of adults have a hoarding disorder and the condition tends to run in families, a bit like a hoarding gene, with women tending to hoard more than men.

Stephanie Watson, executive editor of Harvard Women’s Health Watch, said a leading hoarder researcher, Dr Gail Steketee, notes that while people hoard for many reasons, one of the strongest seems to be sentimental attachment.

“There is some specific association to an object or an object is seen to represent a person’s identity in some important way,” she says. For example, a woman who views herself as a cook might hold on to every kitchen implement until her kitchen is simply too cluttered to use.

As piles of hoarded items grow, dust can collect and piles can hamper mobility – a danger especially for older adults regarding mobility and respiratory issues. And then there are the inevitable pest and rodent infestations and fire hazards.

Often family members don’t understand why the hoarder can’t just throw things away and the issue can become one of great shame and embarrassment. But well-intentioned family members tempted to take matters into their own hands have to be careful of the hoarder’s emotional distress, according to Dr Rasmussen.

Instead, experts recommend cognitive behavioural therapy to help the person better understand the source of their issues and develop problem solving skills.

Amy Revell from National Trauma & Crime Scene Cleaning Pty Ltd based in Australia says serious hoarding is a mental health issue rather than a physical one and such people need professional help.

In her job she has seen more than her fair share of chronic clutterers, many of whom don’t have either the physical or mental energy to downsize their living issues and need her kind of help.

She says there is a difference between overwhelming with objects and living in complete squalor, and she has seen both.

“Just recently we had live mice running through the house while we were cleaning up … often there are illicit drugs involved when it gets to that,” she said.

But over-cluttering with generally older people is as much about giving emotional as well as physical help, especially if disability or dementia are involved.

Amy says she likes to tell her clients to imagine what a family member or outsider would be faced with after the client had gone and reduce their hoarding accordingly while they still have control.

“They need to ask themselves what it would look like to someone else.

“They should keep things that have stories attached that are important to them and then get rid of the rest,” she says.

Amy agrees times have changed since the 1940s and 1950s when people who had lived through the Great Depression had a fixed mindset of never wasting or throwing out a thing.

“They often think they’re a bad person if they throw out something that could potentially be useful.”

She says obsessive collecting can also get out of hand when it goes beyond displaying collections to having them strewn around the house. Some hoarders often overflow their junk into their yards after they have filled their house first.

Amy says some people simply become overwhelmed by life and one day their clutter has turned into a hoarding situation – often personal belongings or those of a loved one and it can be very stressful for some people to deal with.

“We understand that often people feel too embarrassed to call anyone for help, but we are here to help and will approach situations with the utmost compassion and understanding.

“Clean-up and removal of rubbish and debris from a hoarding site typically involves cleaning that a reasonable person would find uninhabitable due to a combination of filth and debris from hoarding, faecal matter, bodily fluids, excessive trash, expired food, odour, mould, mildew and infestation by cockroaches or other insects.

“All hoarding clean-ups are different but just about all of them require some form of heavy lifting, cleaning, sanitising and deodorising.”

Sane Australia, which runs a helpline and online chat room for hoarders who need advice, says it is often asked, “how can I stop my friend, partner or parent hoarding?”

It is estimated that between two and five per cent of Australian adults are living with a hoarding disorder and the condition becomes more of a problem in old age.

Items can hold sentimental value or represent an important person or historical event or simply be considered too good a bargain to part with and the inflated sense of attachment to one’s possessions can cause a build-up of clutter over time.

If left unaddressed this can become overwhelming and interfere with a person’s ability to live comfortably and move safely around their home.

“Supporting a loved one with a hoarding disorder can be frustrating and emotionally draining and can sometimes leave you feeling like you’re swimming against the current,” says Sane Australia.

“For friends and family members, hoarding can lead to feelings of anger, resentment, shame or confusion and relationships can easily become strained.

Sane Australia’s basic tips are to focus more on the person and less on “stuff”; simply be there for your loved one; set achievable goals and celebrate the small victories; allow your loved one to feel in control and encourage them to seek professional help.

Helping a hoarder is more complex than just walking into their house, hiring a skip and throwing out all the items they have hoarded, according to Anxiety Australia. The hoarder would most likely experience negative emotions such as sadness, anxiety and even anger.

Even if the person would permit you to clear out their belongings, the root causes have not been addressed and the behaviour would likely resume immediately with the house, garden or garage filled with more items.

Sufferers need to be encouraged to seek professional help and a good starting point can be their general practitioner who can arrange referrals to appropriate professionals such as a psychologist experienced in treatment for the condition.

Compulsive hoarders can sometimes be prescribed anti-depressants but not all sufferers respond well to medication and cognitive behavioural therapy targeting the features of the disorder has produced better results.

Australians are able to receive psychological treatment subsidised by Medicare if they are assessed by a doctor as eligible for a Mental Health Care Plan.

A red flag is when clutter affects your daily life. You need to ask:

There can be five levels of hoarding ranging from the least severe where there are light amounts of clutter, no noticeable odours and doorways and stairs are accessible, to the most severe which can involve structural damage to the home, broken walls, no power or running water, fire hazards and visible rodents.

According to Anxiety Australia hoarders fear losing things they think will be required, have distorted beliefs about the importance of possessions and are excessively emotionally attached to their belongings to the point where throwing things away causes anxiety attacks.

Such people can often be perfectionists, be indecisive, be procrastinators and have difficulty organising tasks as well as avoiding doing basic things like sorting mail, emptying rubbish and cleaning.

Many hoarders have little insight into their condition and thinking they do not have a problem means they are not motivated to engage in treatment.

At the end of the day, it’s not just “tidy house, tidy mind” but uncluttered house, improved mental health and a happier life.

Here are some strategies to help start reducing the amount of stuff. Ask: