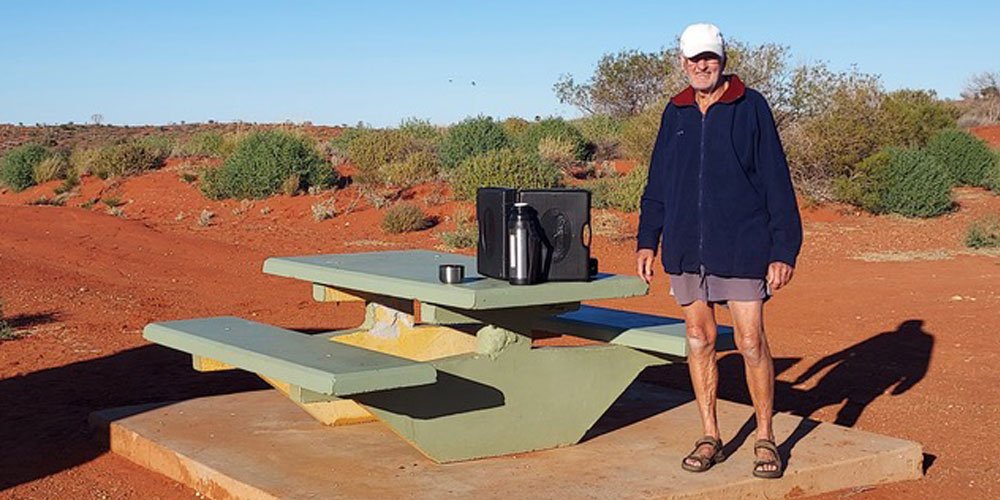 Time for a cuppa — Noel Merwood in the red between Uluru and the WA border where the birds play in the water drips from a tank.

Last  winter, my husband Noel and I set off to drive the great central heart of Australia – a real adventure for two senior Kiwi/Aussies who hold “the land”, wherever it may be, deep in our hearts.

We travelled 17,000 kms and spent 60 days seeing Birdsville, Alice Springs, the Great Central Road, the national parks of Western Australia and the Northern Territory and the top of Queensland in our red Honda CRV.

We ate our cuppa soups from the car and left cash in the cafes and food stores of as many small towns as we could. We slept in the cheapest motels, the convenient roadhouses, and camped out in the Kimberley – mostly comfortable, always happy, always delighted. Here is the record of just one day.

We are in the wonderland that is Uluru/Kata Tjutu and it’s photographic heaven.

We left Curtin Springs in 11C and had felt it drop way below that during the night. As we hit the road, the shapes and colours of this cattle land impress mightily.

There are a few groups of beasties about. The Curtin Springs farmers use their own beef and are applying for a slaughter licence as they have to truck their stock hundreds of kilometres for processing.

They will succeed – if the rainfall permits. There has been autumn rain and this is obvious in the green which is good cattle fodder this year.

The morning colours are astonishing: silver-topped or pink and purple shrubs, golden stalks, clumps of grass in all tones of green, and grey salt bush.

The morning light is delicious. There are small trees and lots of bigger trees. Everything seems to claim its own patch and the red dirt is the background for it all – that, and the blue cloudless sky. We stop off road to boil up and by the table is a tank. Beside it is a can to catch drips for the birds.

A multitude of the most delightful little birds are dancing, drinking, dipping.

Uluru comes in sight, all pink and soft purple, and the Kata Tjuka is in the distance.

We tell the girl at the National Park entrance that we do not need to pay park fees as we are passing through. It’s only when she sees our paperwork that she accepts our story.

As we come closer to Kata Tjuku (The Olgas), moving from the morning light into the shady side of the “big boys” they become dark and moody, shady and serious. And that change is in just a few kilometres.

But we leave these monoliths and turn, almost alone, towards the WA border, 200kms away.

This is the stretch of road, reputedly “bad”, that we had wondered/worried about, but it’s a beautiful drive.

We are on the edge of the Gibson Desert to the north, and moving southwest into the Great Victoria Desert.

Dust? Sand? Yes indeed. Emptiness? Flatness? Nothing could be further from the truth. Red dirt? Absolutely. 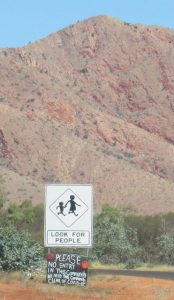 We pass between ranges of high outcrops in amazing shapes and colours. Uluru may have claimed fame but it’s not the only one deserving admiration.

The road is dirt, red dirt, endless red dirt. It is more than a motorway wide.

The colours of the desert are prolific –trees, shrubs, grasses. Every turn brings change: the rocks and ranges in the background. The red dirt road treats us well.

The border is a non-event, though there are “road closed” signs because of Covid. Who knows if we were noticed.

We drive on and the car’s clock jumps back 1.5 hours. The road improved and became gravel, but we missed the feel of that earlier track.

Another 100km and we pull into Warakurna, the best little roadhouse imaginable. It’s not cheap but it pleases us greatly as we watch the day close down.

The gas is locked within cages but we can read the price at 240 a litre and reckon we are okay for tomorrow. While being in WA, they are still in NT time which had us confused and we had to call the manager out of his scheduled hours on a Saturday. He was gracious and we learn that this is a very good community; that this area has the only still-manned meteorological weather station in Australia, although it’s closed to the public because of Covid induced staff shortages.

There is also a nuclear history to these parts. In the 1950s, the Brits were testing missiles in Australia, sending long range heads out of SA, to see if they could reach the Indian Ocean. Some didn’t make it and came down around here.

The weather station was developed at that time because, after all, the testing planners needed to know conditions out here in the “empty” middle of this vast land!  And that was Saturday – travelling and learning at its best!

Warm up in the Outback