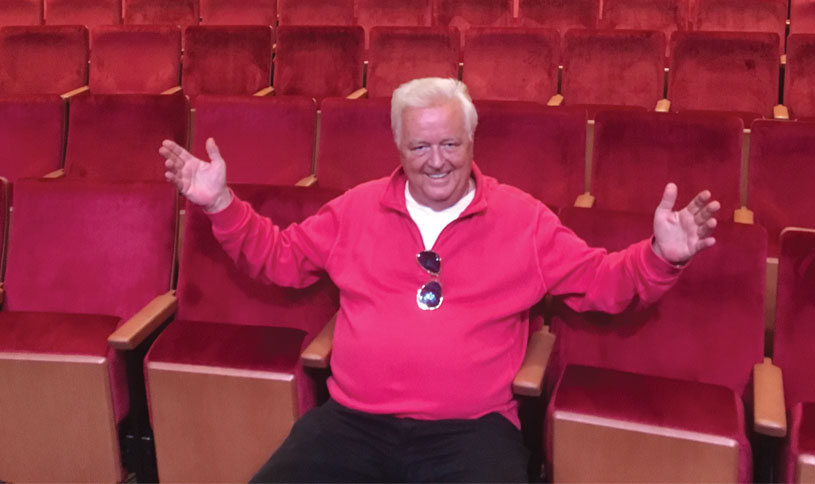 The driver is asked to pull into an all-night roadhouse.

Young balances his pie and sauce diet by drinking Kombucha, advertised as “filled with living probiotics to assist with digestion, immunity and more”.

These are the musicians who grabbed the nearest guitar and kicked off the rock ‘n’ roll music scene in Australia in the ’60s.

The penultimate was to appear on television’s pop music shows Bandstand and The Go!! Show.

Tonight, after sold-out concerts at Brisbane’s QPAC Concert Hall and Toowoomba’s Empire Theatre, this year’s G0!! Show Gold reunion stars in the coach, (along with the aforesaid Johnny, Colleen, Marty and Normie) are Lucky Starr, Izzi Dye, Tony Worsley, Bobby Bright (Bobby & Laurie) Ronnie Burns and Rob E Gee, plus a line-up of musicians who have been there and seen it all.

This King of Pop (there are three on this tour) keeps physically and musically fit and can still hit his high notes with ease.

Normie’s just been with master guitarist Tommy Emmanuel, and rolling his eyes, says he wishes he could be just “100th as good”.

“I used to think buying a new guitar would make me better, but now (with nine) I know its practise and more practise,” he says.

Since the Go!! Show Gold concerts began eight years ago, there’s been no shortage of artists who appeared on the television version.

Promotor Denis Smith (a former Go!! Show producer) said getting them together at the same time was the challenge.

There’s been Brian Cadd, whose latest album saw him invited to perform at the 50th anniversary of the legendary Woodstock Festival this year.

Another GO!! Show family member, Russell Morris who performs 60-70 shows a year, against all advice, embraced the blues which was met with 100,000 in record sales and a new fan base.

“Hard to pin him down for another show right now” said Dennis, adding, “but he will be back because they all simply love what they do.”

After performing to a sold-out the Brisbane concert hall audience, this legendary cast of 27 artists and musicians on the coach had rocked on at their hotel until 3.30am, while the ground crew drove into the night to Toowoomba to set The Empire Theatre.

“Well a few of us did get together in Bobby Bright’s room for a catch-up,” said Johnny Young.

So why am I here? As a journalist whose first gig in the ’60s was TV Times magazine in Melbourne writing about these aspiring rockers, it was also a reunion for me.

Happy surprise was seeing Marty Rhone home for a couple of weeks before returning to the USA where a single (We Had a Good Thing Going) from his new country and western album has made it to No.1 on the charts.

Izzi Dye (a mean tap dancer) up at 8am for a two-egg breakfast, often performs in London, because he has a daughter there and it is a great excuse to visit and have his stage suits made, mostly in satin.

Another daughter, Bianca Dye, is a 97.3FM announcer.

Within days of these three concerts he is back- to-back performing in Redlands, Nerang and Coolangatta.

Ronnie Burns, reliving memories with Johnny Young, penned hit Smiley and appears ageless which he puts down to a Clarins revitalising face cream.

“Made for men,” he insists.

Colleen Hewett, who gets a standing ovation the moment she appears on stage, offers to “chuck to any of you who ask nicely” the keys to her house on Fiji’s Coral Coast.  This is where she heads between gigs.

Rob E Gee aka Rob Porter is finally settled in Australia after 46 years commuting to USA where he built an enviable career as a regular guest on US Network tv shows, both variety and drama. He drops names like Eagle Rock and Daddy Cool, Air Supply and Rick Springfield and appearing with Charlotte Rampling in the movie Three.

In Brisbane, there was an interesting (for the audience, panic for the promoter) moment when Rob, ever the professional, set about tuning his Hawaiian steel guitar on stage before launching into his famous Jezebel.

As Izzi Dye said, “the best show is in the dressing room”.

The coach ride wasn’t bad either.

They’re The Go!! Show family, and certainly the days of hotel-trashing and groupies is behind them.

They are now proven, veteran professionals.

Lucky Starr (aka Leslie Morrison) is still the only one of these legendary rockers who can flawlessly perform the tongue twisting I’ve Been Everywhere.

When he performs Sing, Sing, Sing his audience does just that. It’s all about great music and great memories.

Lucky also grows bonsai, “hundreds of them” and gets up at 6am.

Once known as a long-haired, wild-boy of rock, today Tony Worsley, (The Fabulous Blue Jays) is now calm and charming, and back at doing what he has loved since he first jumped on stage as a school boy.

Selling his Caloundra restaurant Velvet Waters in 2007, Tony headed south where he runs Hastings Cove Holiday Apartments – that’s when he’s not back on stage with his pioneering mates.

There was more to come when the tour arrived at Melbourne’s re-furbished St Kilda Palais Theatre.

Two more legendary rockers joined the show – the 1960s heart-throb Colin Cook and the AFL’s mascot music star Mike Brady, who closed the show with his legendary anthem Up There Cazaly.

The audience stood as one and rocked.