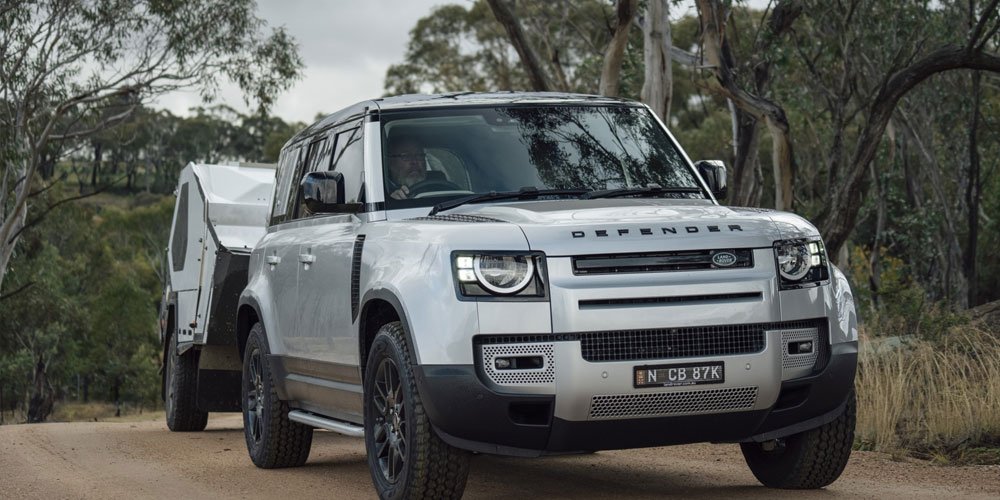 The original Land Rover launched in 1948 soldiered on to become the Defender in 1990, but much of the original 1940s design and engineering remained through to the end of that first-generation production run in the early 2000s.

The Defender was a square-jawed body sitting on a ladder chassis and live axles with rudimentary cabin comforts; always very capable if not always very comfortable.

Now the new five-door Defender 110 (the shorter Defender 90 is still to arrive) changes all that to become a thoroughly modern vehicle, leap-frogging rivals such as the LandCruiser and Prado.

This new 110 is a head-turning wagon with excellent on-road manners for a four-wheel drive, excellent cabin design and excellent off-road abilities.  It has a monocoque body (meaning no more separate chassis), independent suspension for all corners (meaning no more leaf springs) and a swag of tidy buttons for engaging off-road settings (no more stiff levers).

All this technology and design is wrapped up in a handsome body with some old-school styling cues such as checker plate trim on the bonnet, square-edged rear corners and skylights over the rear compartment.

It is some 5m long and boasts amazing interior space and comforts. Pragmatic touches include solid rubber matting for the floors, grab handles across the dashboard and push buttons which remain unmarked until the push button ignition is switched on.

It is a most comfortable cabin – head and shoulder room are excellent in the first two rows of seats – and with top class ergonomics plus today’s mod-cons from satellite navigation to Bluetooth connectivity and decent audio system.

To move the Defender around there’s the choice of four six-cylinder engines, petrol and diesel, with a 386kW petrol V8 to come. All are constant four-wheel drive with eight-speed automatic transmission plus low range when needed.

Despite the Defender’s bulk it’s an easy machine to place in the traffic with a range of driver aids from collision and lane-keeping warnings to rear view camera. All-round vision is limited only by the tailgate-mounted spare wheel.

Out and about, good roads or bad, the optional 294kW petrol engine and the Land Rover’s road manners mean a deal of confidence in hustling along. It holds the road with poise and a hint of controlled body roll, much like early Range Rovers.

Those kilowatts are backed by 500Nm of torque from 2000rpm and fuel consumption could head well into the teens if tempted to push along; the factory claim a 0 to 100km/h time of 6.1 seconds and a 191km/h top speed.

Fuel consumption on an easy highway run came in around 10 litres per 100kms. The diesel engines should offer better economies.

Heading off into the rough stuff and the 21st century Land Rover has buttons to raise the suspension for 291mm of ground clearance, a button to engage low range and another to let the management systems work out best engine and transmission responses for various conditions, from bitumen to sand to mud and rocks.

It will handle the most difficult of tracks.

So, the new Defender 110 is far more capable on and off the road, if far more dependent on electronics and computers and such.

It’s also jumped a couple of price grades, now starting from a recommended retail of $74,500.