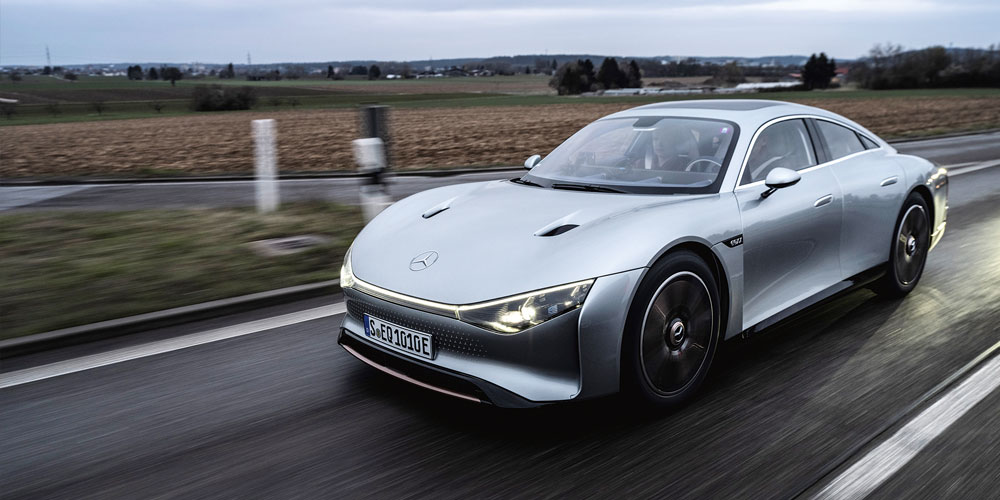 A pretty special, very slippery Mercedes-Benz has now driven better than 1000 kilometres across Europe on a single battery charge.

As the business of all-electric machines gathers momentum there remain two drawbacks, hold-backs if you like  before Australians take to EVs in droves. (This is setting aside the vexed issue of coal-fired power stations for a minute.)

The first question is cost, the currently high to premium showroom prices. The second is range and accessibility of chargers. Prices will steady a bit, especially with Chinese manufacturers moving in. Range though may long be an issue in far-flung corners of this country, particularly when there’s a paucity of fast charging stations; EV pioneers are often frustrated too by waiting for others to finish ‘fuelling-up’ and often finding chargers not working.

Now while Mercedes’ Vision EQXX concept, driven from Germany over the Swiss Alps to the French coast, shows advancing EV technologies will cut range anxieties, innovations at remote Australian roadhouses  using waste cooking oil to fuel generators  may help fill gaps.  An off-grid system at the Caiguna Roadhouse on the Eyre Highway, around 370 kilometres east of Norseman in Western Australia and 370 kilometres west of the South Australian border, is one of the world’s most remote charge stations. And an all-green solution.

The BiOfil  system developed by retired engineer Jon Edwards uses left-over cooking oil for ‘clean’ electricity. “Oil that is used in deep fryers comes from seed crops such as canola and sunflower, the plants absorb the CO2 and sunlight to make the oil which is put into commercial use as fryer oil then it becomes a waste product,” Mr Edwards said.

“BiOfil extracts the energy from the waste product to charge EVs using a generator. The CO2 produced is the same as the CO2 absorbed, so the process is net zero,” Mr Edwards said.

The first electric car to use the Caiguna station on the 1650-kilometre haul across the Nullarbor was a Polestar, a Swedish EV. “The West Australian government is planning the world’s longest electric highway, which is great, but it doesn’t connect WA to SA, there’s some 720km of desolate highway with no fast charging for EVs. As we say, the big lap has a big gap,but not anymore,” Mr Edwards said.

While the eastern coastline is reasonably well-covered for chargers there remain spaces for EV fast charging in regional and remote areas.  In early 2022 there were 3000 public charge stations at 1650 sites across the country; 470 of those, at 250 sites, have fast chargers (which may still need an hour to re-power an electric car).

Network gaps could take time to fill.  Sandfire Roadhouse, 1900km north of Perth and 320km south of Broome, has one three-phase power-point for EVs. “But it draws a massive amount of power on our generators,” says Ken Norton. “If people just want to come in for a couple of hours to supercharge we can’t provide that service. Some people book a room and they’ll put it on a trickle-charge overnight. Yeah, we’re not geared for the fast charge.”

Ken finds EVs “a little bit out there” and thinks hydrogen-fuelled EVs would work better than pure EVs in remote areas.