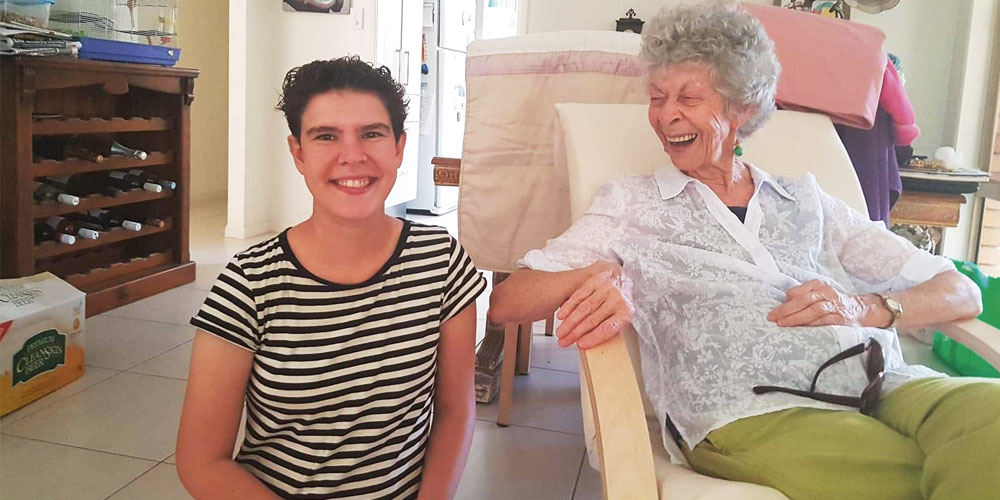 Being diagnosed with Cerebral Palsy as a baby in 1937, meant your future life was going to be tough.  But if you had the support of a  good, strong family, the use of a smart mind and your name was Ann Bromley, life was a hurdle you were going to learn to jump through – no matter how high,

Well perhaps not jump through, because Ann says her balance was bit of problem.

“I didn’t have a walker or a walking stick,  so you could just give me a shove and I would go over,” she says.

On the family farm in Tamworth, she recalls the difficulty of riding a horse and staying in the saddle.  Ironically, it was her dedication to the rigour of ballet classes that improved her balance and in fact, kept her on the horse.

“Ballet was as good as having physiotherapy classes.” she says.

Today,  Ann speaks with a slight, but obvious speech impediment. Yet, like many other things she laughs it off.

After spending a number of years overseas  and taking in the sound of various accents  – when friends find it hard to understand her –  she simply applies her own brand of humour :  “It’s just my Australian accent you can’t understand,” she responds.

Ann was 10-years-old before she spoke, but she says this meant she could sit quietly in school  and soak up knowledge. Contrary to any idea that not speaking equals low intellect, her mother, realised her daughter’s ability and contacted Sydney university to evaluate  Ann’s learning aptitude.

“The test showed I was two and half years ahead of my age.” At 18-years-old, Ann completed her education.  At this stage, her father who moved from an accountancy career to farming  in Tamworth, was not well and she stayed on the farm to help out with all the physical labour including driving a tractor.

When the farm was eventually sold, she moved to Sydney and worked as a Nanny.

By then she was dreaming of going overseas and took on an extra position as a nursing assistant to bankroll the fare.

“But the girlfriend I had planned to go with deserted me at the last minute,” she recalls.

“I thought bugger it, and decided to go on my own.”

Ann went onto spend a  year in London. Within a short time of of arriving home, she met her future husband who worked in sound production in the film industry. Together, the couple had three children, the eldest born in the UK, the second in Montreal and finally the last born in Sydney.

After the marriage ended, Ann continued her European and American travels, eventually settling closer to family in Mackay, Queensland, for a few years.

It was in Mackay, where Ann recounts a successful jump through a big life hurdle..

“I was in my fifties when I was living in Mackay, and I was asked to give a talk to parents of disabled children on growing up with a disability.

“I’ll never know why I agreed to do it as I’ve always avoided speaking when I’m out, as I hate the way people stare.

“I nearly died when I found out there were about 200 people attending. At the end I received a standing ovation.

“After that people who heard me would ask me to do a talk, workshop and whatever,  I ended up doing this in Canada, UK, USA, NZ and  of  course Qld.

However, that wasn’t the only life-changing event in Ann’s life.

Perhaps, she says: “The most surprising  one was getting married and having three normal healthy kids. I was told by so-called well-meaning friends I shouldn’t get married and certainly not have kids.

“I mean how  can a disabled person look after a baby.”

The list goes on and Ann continues:  “Then there was my first trip to the UK by ship on my own!  Heaven forbid!

Still breaking new personal ground, Ann has written and published a biography: “That’s why I called my book,  ‘I Did it Anyway.’

You can email Ann for her book  at abromley@westnet.com.au. The cost is $20.00 plus postage.