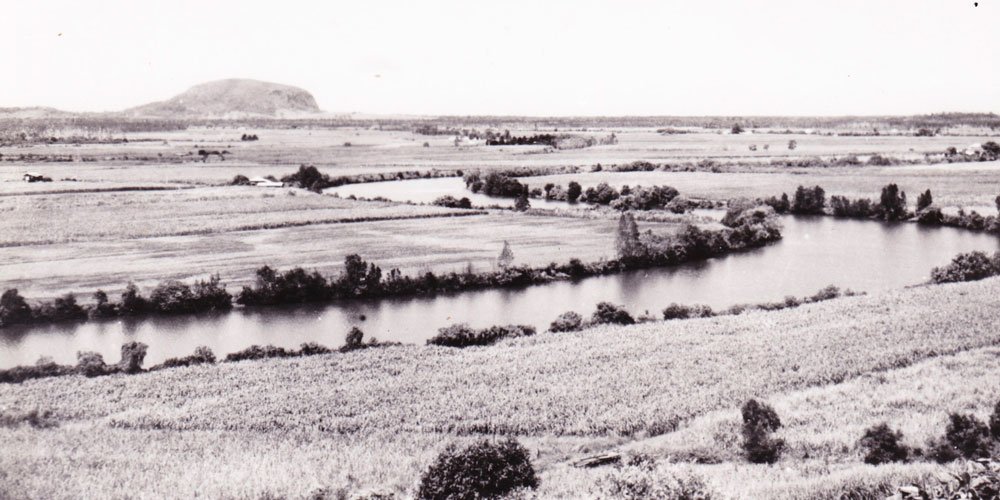 The view across the Maroochy River and canefields to Mount Coolum from Dunethin Rock in the 1950s.

The beauty of the views from Dunethin Rock may be one of the district’s best-kept secrets. It was an Aboriginal burial ground, an ancient tomb, and a gathering point and more recently, a part of life on the Maroochy River.

A 1925 writer claimed: “Back in 1875, when living on the Maroochy River, a few miles from Yandina, at a place called Donathim, and close to a camp of over four hundred blacks, I saw an immense rock of a sort of sandstone formation, about 30ft high.

“At the base of the rock, which was almost circular, there were a number of cavities of the shape of an inverted V about five feet high and four to six feet deep. Well, every one of those holes contained human bones in all stages of decay, while not far away from the rock there were several bodies bound round with sheets of bark, and resting on horizontal limbs of trees, not long dead.

“This camp was the headquarters of a number of tribes, and the sepulchre was called Donathim. The camp in question was an ideal one. It was bordered by the river and a tidal lake of several acres in extent, from which an unlimited number of fish could be obtained.”

The carpet snake, Cabool, is believed to be the totem of the Aborigines of this area thus the name of a nearby creek is Caboolture Creek.

Aboriginal man Andrew Ball gave the meaning of Dunethin or Doonathan, as he called it, as being “a lake”.

It was spelt Dunethim until the 1970s, but since then has been officially spelt with the “n” at the end.

The first European settlers came up the river, the highway into the hinterland, from the 1860s in search of timber. As early as 1873, Dunethin Rock was seen as a possible Reserve and no European was allowed to select any of the land around it.

In 1901, a Recreation Reserve of 210ha was gazetted around Dunethin Rock. Within this area, reserves for a school in 1911, a School of Arts in 1913, recreation and sports grounds, camping grounds and roads have meant that the original area is much reduced. (The school closed in 1972 and the School of Arts in 1963).

After the record flood of 1893, the Manthey family were successful in an application for two acres (just under a hectare) at the base of the rock. They explained that it was the only ground above flood level the length of the river, where they might find safety.

From 1909 to the 1960s, riverboats delivered mail and supplies to the families who lived along the river.

By the 1960s cars and trucks became common and the road was used more than the river for transport.

The cane industry dominated from the 1890s to the closure of the Moreton Mill in 2003.

The first district tourism occurred in 1910 when a party of government officials toured the river.  They believed it important to conserve beauty spots such as fine patches of scrub along the river. Dunethin Rock was included.

By the 1920s and 1930s, cane trams and boats delivered visitors on excursions from cities and towns.

They came to picnic, climb Dunethin Rock or to partake of the river’s abundance of fish and crabs.

The Nambour and District Scouting Association leases an area for scout camps and a number of buildings have been relocated there. Dunethin Lake is part of the Maroochy River canoe trail.