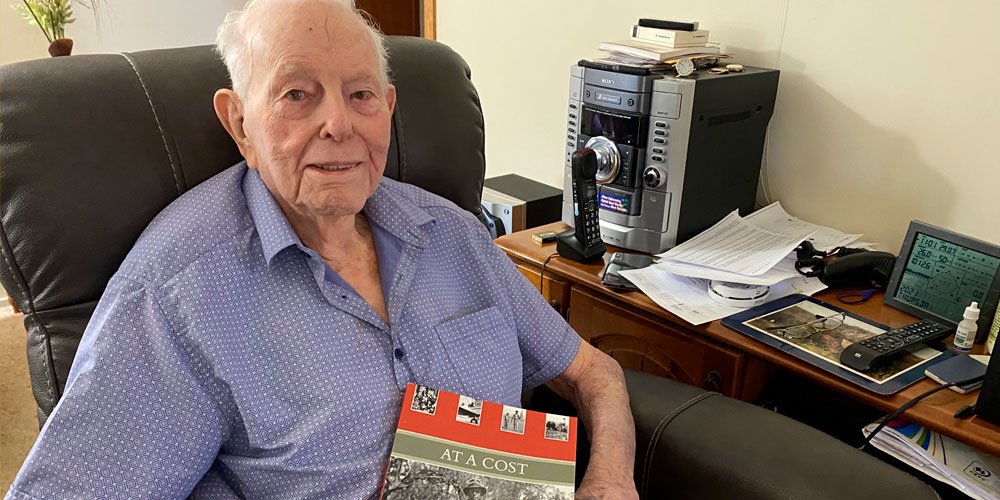 Last month, Roy McFadyen turned 103. He still lives independently in his Golden Beach home on the Sunshine Coast, still takes and develops his own photos in a darkroom he built, and recently celebrated his remarkable book – an autobiography called At A Cost – going into its third reprint.

Lively and quick witted, he lost his driving licence at the grand old age of 102, and has even conquered rounds of throat and bowel cancer.

His life has been full of ups and downs, from orphanages as a small child to becoming a successful mechanical engineer, businessman and inventor.

Born in the year of the Spanish flu, he has lived through the Great Depression and World War II and yet still has an amazing recall of the places, names and dates that contributed to putting his life’s story into words and pictures when he retired from Melbourne in 1981.

As one reviewer of his book, Rod Moss, wrote: “This is not just an historical account of life in rural Australia from 1920 to 1960. It is an acutely personal story of the pain of growing up with a father he never knew, a mother incapable of normal maternal care and an early childhood spent largely in orphanages.”

“My Mum decided to kick me out when I was 15 and I was sent on my way,” Roy says. “I had a myriad of small jobs. It was the middle of the Depression and you had to be lucky to get a job at all.”

With just a bicycle and a box camera he cycled from Melbourne to Bendigo.

“It was about 600km to the Mallee, but I was lucky I went to the farms. In the city you were struggling for food generally but on the farms, there were an excess of sheep and chooks and you never went without food.”

That changed when he ventured up to the Northern Territory in 1938 to work on stations outside Alice Springs: “It was the pioneering days of Central Australia and food was scarce.”

But Roy formed a strong bond with the local indigenous people and many of the Aboriginal men among his friends are featured in his historic photographs of men, animals and machines on the land.

“I got on very well with them. They helped me and I helped them – I’d bring them bags of flour and such from my own money to help out.”

When World War II was declared he joined the Royal Australian Air Force and, using his skills gained in technical training, he serviced Hudson and Beaufort bombers. It was during this time he lost his brother Bob who died when his plane disappeared in action over the Pacific. Roy had two other brothers and a sister, but he is the last one left now.

After the war, Roy established his own aircraft maintenance business, Aeroswan, in Swan Hill, Victoria, working in aviation from 1953 to 1979 before selling out to other licensed aircraft engineers and retiring at 61.

He and his wife Lola had two children, Lynda and Ian, and then five grandchildren and now two great grandchildren.

His daughter Lynda says losing Lola after 74 years of marriage had been the most difficult time in her dad’s life.

“He cared for her as long as he physically could as she succumbed to the terrible disease dementia,” she says.

Former Northern Territory administrator Ted Egan has compared Roy’s book to other great Australian books “written by self-effacing men who encountered all forms of discrimination and exploitation in their lives but rose above adversity to become owners of stories that deserve a prominent place in Australian literary and social history.”

Roy’s amazing black and white photographs are also an insightful and accurate portrayal of a sometimes-grim period in Australian history.

“This book is about my life and work. It is also about the legacy of my parents’ actions in the 1920s,” he says.

“For their convenience I was put into orphanages for most of my early childhood. And then, although I tasted something of a ‘normal’ family life until I was 15, I was again dismissed – into the hard times of the Depression.

“This enforced independence shaped my outlook. I saw hard work and doing things well as the way to cope with any situation.

“From the age of 15, in the Mallee region of north-west Victoria, I ploughed and sowed, harvested and harrowed; east of Alice Springs in the Northern Territory I built stockyards and houses, sank wells and rode with cattle.

“With the war, I used my hard-won mechanical skills in military aircraft maintenance and post-war I set up my own motor garage.

“With the rise of light aircraft in the agricultural industries in the 1960s and ‘70s, I established a flourishing aircraft maintenance business.”

No one is more amazed than Roy that he has reached such a ripe old age, given the inherent dangers of his many jobs and the trials with his health. In fact, he says he hasn’t even had a broken bone.

One of his closest calls was when he was gathering hay on a horse-drawn cart in the Mallee and was sitting atop a load that was going through some timber.

The reins on one side snapped and the horses took off through the trees and all Roy could think was “I’ve got to get out”.

But when he went to jump, he tripped on the tension wires supporting the load, narrowly missing the rolling wheels.

“I hit the ground without a scratch but the wagon was wrecked,” he says.

Roy’s book At A Cost is available at The BookShop at Caloundra for $40 or email him vicroy167@gmail.com