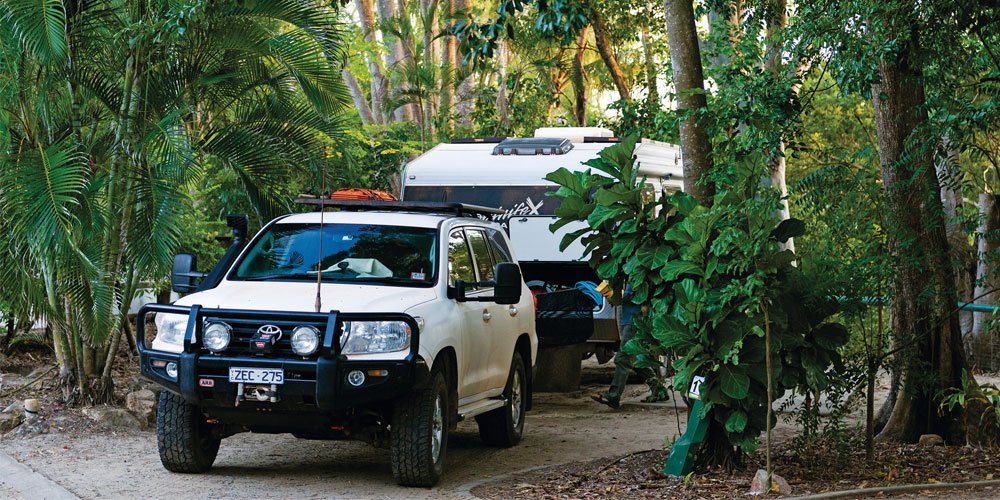 Meander up to the tip of Cape York. Head hell, west and crooked as there won’t be any lounging beside a Bali pool or cruising down the Rhine for a while.

The joys of vanning, or heading out with a mobile home, have been around for a long time.

Caravan and motorhome – aka Recreational Vehicle (RV) – sales have been solid for decades with 741,000 now registered in Australia. And 192,895 of these, towable and motorized RVs live in Queensland.

This state continues to have the highest number of registrations, accounting for 26 per cent of Australia’s recreational vehicles.

The advantages of caravanning are with the nomad, grey or not, plus local businesses from Brisbane to Birdsville, Carnarvon to the Cape. The traveller earns spectacular sights and amazing experiences while local stores and pubs earn a fresh dollar.

It’s about meeting people too, says Marl Crank from Dalby: “Interesting people from all walks of life.”

Since buying their first van in 1993 Marl and husband Terry have been around Australia twice and one year, spent three months just in the top of Queensland. “It’s a big country and a pretty country. We bought a van to see the countryside and to have our own accommodation, clothes hanging up and bed made every night.”

Sunshine Coasters Bev and Terry Everson are not long back from an 11,000km trip around Queensland and the Northern Territory with their Isuzu wagon and a Murraybilt trailer.

“Some of the country towns, like Karumba, were a real highlight,” Terry says. “And all that Gulf savannah, just a different sort of countryside that you’d never imagine.”

“We finished our trip at the Currawinya National Park near Hungerford on the New South Wales border. That was stunning. The wildflowers are just beautiful, mind-blowing actually.”

Caravanning is the biggest component of Australian tourism according to Ron Chapman, a special advisor to the caravan industry. There are some 500 caravan parks around Queensland alone – from Cape York to Coolangatta and west to Thargomindah – even if some are little more than a handful of sites behind a service station in Woop-Woop, notes Ron.

Then there’s “freedom camping”, getting off the beaten track and off-grid in off-road RVs.

Last year, Queensland recorded a high of 2.7 million caravan and camping trips for 12.5 million nights in the state. Across Australia, caravans contributed 26 per cent of total holiday nights, ahead of hotels, motels and resorts.

In regional Australia, caravans and camping contributed one-third of all holiday nights in 2019.

While about 80 per cent of Australian-made caravans come from Victoria, Queensland is the leading state for camper trailer manufacturers and off-road van makers such as Bushtracker, Kedron, Spinifex and Sunland.

These off-road caravans and trailers, sitting higher on more sophisticated chassis and suspension for better ground clearance, are top-sellers in the Sunshine State.

He now offers four base models of off-road vans, plus a pop-top model, with 26 floor plans, and then customises each van to order.

“That’s why people like to come to the factory and go through the whole build process,” says Steve. “These days the vans seem to be getting bigger. We still do some normal sizes, but more are now 22ft-plus with people basically looking for everything you’ve got at home in a caravan.”

Essentially, Spinifex vans are all fully off-grid trailers, carrying plenty of water, a lot of power and a lot of solar. Today’s lithium battery and inverter technology allow vanners home comforts and appliances without the need for mains power.

“And it’s not just about what a van looks like on the outside, it’s what’s underneath that counts in an off-road van, especially if you want it to last,” Steve says.

“Suspension, the chassis, framing – all these sorts of things are important. And if you don’t have something built properly it’ll fall apart pretty quickly.”

Some vans may not see the Back of Beyond but a well-built caravan, camper trailer or motorhome is important, as even Queensland’s bitumen roads can be rough and rugged.

Yet there is an incredible range of experiences to be had across this state.

The Adventure Way, for instance, takes the trekker 1400km from Brisbane to the Dig Tree in sprawling Channel Country where supplies were left for ill-fated explorers Burke and Wills.

The Savannah Way runs 3700km from Cairns to Broome.

Or head out to Longreach and the Stockman’s Hall of Fame before venturing up to Winton, the best little town in the west and home to Waltzing Matilda and the Age of Dinosaurs museums.

There are faraway beaches and rivers and, closer to the south-east corner, 101 places to explore from the majesty of the Carnarvon Ranges to Queen Mary Falls to the sands of Fraser Island.

Whichever way the road leads, proper preparation of vehicle and van is key.

The experienced Terry Everson says ensure fuel and water supplies will last the distance between far-flung spots plus drive to conditions. Plan ahead with provisions because some remote areas may not carry all the necessities or road conditions may mean parking up for a while.

“And tyres are always a big issue,” Terry says. “You should assess the road ahead and adjust tyre pressures accordingly. I normally run 40 psi on the MU-X and 50 psi on the van but on some roads I dropped down to 28 psi for both.”

The Eversons didn’t blow a tyre on this last 11,000km tour while fuel consumption for the Isuzu wagon towing a 2100kg trailer averaged around 15 litres per 100km.

Diesel prices ran to $2 a litre in remote places and, with some free camps thrown in, the Eversons’ accommodation averaged $12.04 a night for their 73 nights away.

Tow vehicles and trailer weights, unladen and not, are important to double-check when buying any type of recreational vehicle.

Spinifex’s Steve Thompson says the first question he often asks prospective customers is what car will be used, although with the price point of his vans he doesn’t see too many inexperienced vanners. Rather, they are the folk who started out with a low to mid-range priced van and are now moving up.

Any tow vehicle needs to be able to legally pull the van’s weight and have a tow ball rating that will accept that particular load.

SUVs and dual cab utes are often favoured; turbocharged diesel engines mated to automatic transmissions among the best mechanical options. Be sure to check the vehicle’s handbook as some manufacturers have speed limits when towing. Exceeding those could void warranties or insurance policies.

Some states can have different speed limits for towing certain weights or for certain road conditions.

Some folk, Brian suggests, buy a brand new four-wheel drive out front of a brand new caravan without having towed anything apart from a box trailer.

Vanners first need to know trailer weights and towing capacities plus understand all-round performance, from braking to steering to fuel consumption, will be affected.

“That’s the hardest part, trying to convince people that once you put something, and all that extra weight, on the back of a vehicle you cannot drive it the same way,” Brian said.

So pick the road, balance the load, and head off into the sunset. At a sensible pace.

WEST WHERE THE PELICANS NEST

RACQ trainers say a swaying van – when a trailer tries to overtake the car – can be caused by a number of issues:

It can happen on good bitumen and in good weather. And once a van begins to sway that swinging, snaking motion may increase through the fulcrum at the hitch point.

So what to do? Most experts agree: